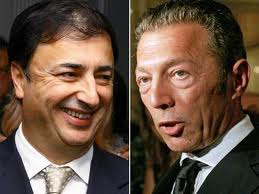 Russian billionaires, an African general, former Mossad agents and a Chief Rabbi – all embroiled in a dispute over Angolan diamonds.


It may sound like the plot of a Hollywood thriller, but these are the very real players in a $1bn court case which opened at the High Court yesterday.

The Israeli-Russian businessmen Arkady Gaydamak and Lev Leviev both claim to be the rightful beneficiaries of a lucrative diamond mining venture. While Mr Leviev appeared before the London court yesterday, Mr Gaydamak chose to give evidence via video link from Israel while fighting extradition to France as he attempts to appeal against a conviction for tax fraud.


Opening the case for Mr Gaydamak yesterday, David Wolfson, QC, said: "This trial is not about Mr Gaydamak and Mr Leviev and who is the bigger saint. Both have led full and somewhat colourful lives. Therefore, we do urge the court to rely on the central question."

The case centres around the profits from Angola diamond mining and an agreement Mr Gaydamak insists they signed 11 years ago.

He claims that the two men agreed Mr Leviev would hold his share and income from the Angolan Diamond Selling Corporation Sarl, allowing him to keep a low profile. The alleged document was handed into the safe keeping of the Chief Rabbi of Russia. But Mr Leviev insists no such deal was done. He claims the document signed in December 2001 was simply an agreement that Mr Gaydamak would donate to a charity he had founded. Meanwhile, Rabbi Berel Lazar can no longer trace the disputed contract.

The dispute grew out of Angola's civil war when the government was trying to wrest control of the blood diamonds that Unita rebels were using to fund their cause. Mr Gaydamak supplied arms and food to the Angolan army. He also supplied security services with the help of former Mossad agents and agreed to set up a company in joint ownership with the state with exclusive rights to sell Angola's diamonds.

Mr Gaydamak says he approached Mr Leviev to be the "front man" in the venture – a claim the latter disputes, insisting he established the company and that Mr Gaydamak had "no more than a limited role". Having signed the agreement in 2001, Mr Gaydamak claims he received multimillion dollar payments regularly from Mr Leviev until they suddenly ceased in 2005. He claims he is owed in the region of $1bn (£640m). Later Mr Gaydamak claimed that an Angolan general fraudulently convinced him to sign away his claim to the company. The case continues.

Gaydamak vs Leviev: Money and power

Arkady Gaydamak, 60, was born in Russia but emigrated to Israel and later France. Last year he won an appeal against an arms-dealing conviction in France, but is still appealing other charges. In 2007 he founded the Social Justice party in Israel and the next year ran for Mayor of Jerusalem.

Uzbek-born Lev Leviev, 55, moved to Israel as a teenager where he worked in a diamond-polishing plant. He made part of his fortune taking on De Beers in the sale of rough diamonds. He reputedly bought the UK's most expensive home – a £35m Hampstead mansion.
Posted by joe levin at 8:13 AM