Crown Heights - This Man Wanted for Shooting of 12-Year-Old 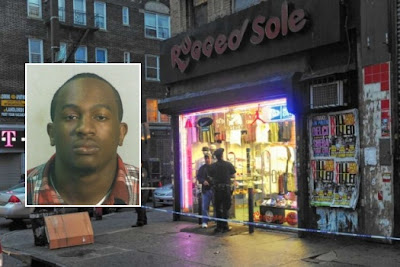 The NYPD is seeking the public's assistance with the whereabouts of Gerald Spears, who is wanted in connection with the shooting of a man and a 12-year-old boy in crown Heights.


The Circumstances are as follows:

EMS also responded to the location and transported the victims to Kings County Hospital, where they were listed in stable condition. A Black Male aged 45 was arrested at the scene and a .9mm handgun was recovered from the scene. A second suspect, Black Male aged 23, fled location prior to arrival of Police. The investigation is ongoing.


The following individual has been arrested and charged in regards to the above listed incident:

The second suspect Gerald Spears is described as a Black Male aged 23, 5'05 in height, 180 lbs, with short black hair.

Anyone with information in regards to this incident is asked to call Crime stoppers at 1-800-577-TIPS (8477). The public can also submit their tips by logging onto the Crime stoppers website, or by texting their tips to 274 637 (CRIMES) then entering TIP577.

http://privateinvesigations.blogspot.com/2012/05/crown-heights-boy-12-hit-by-stray.html
Posted by joe levin at 8:17 AM