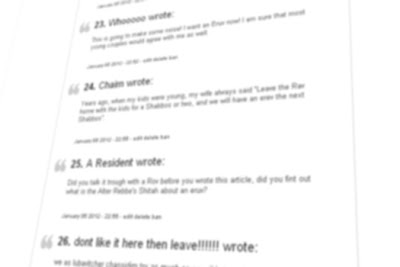 Many visitors to blogs and news websites enjoy the liberty to post comments online without revealing their identity, but if a proposed bill in the New York State Assembly is passed, that common practice may become illegal.

Watching faceless online passerby troll bloggers or mock fellow scribblers can be a drag, but what if legislators’ answer to online ne’er-do-wells was to ban anonymous comments from websites entirely? That’s what the state of New York is planning to do in identical bills — S.6779 and A.8688 – proposed by the New York State Assembly that would “amend the civil rights law” in order to “[protect] a person’s right to know who is behind an anonymous internet posting.”

The bill would require a web administrator to “upon request remove any comments posted on his or her web site by an anonymous poster unless such anonymous poster agrees to attach his or her name to the post and confirms that his or her IP address, legal name, and home address are accurate.” By “web site,” the bill means just what it seems to: Any New York-based website, including “social networks, blogs forums, message boards or any other discussion site where people can hold conversations in the form of posted messages.”

Wired noticed the bills on Tuesday and immediately pointed out the disparity between the legislation’s tenets and the First Amendment to the U.S. Constitution, which stipulates:

Congress shall make no law respecting an establishment of religion, or prohibiting the free exercise thereof; or abridging the freedom of speech, or of the press; or the right of the people peaceably to assemble, and to petition the Government for a redress of grievances.


While the First Amendment doesn’t specify anonymous speech, the Electronic Frontier Foundations notes that the U.S. Supreme Court “has ruled repeatedly that the right to anonymous free speech is protected by the First Amendment.” Consider the Supreme Court ruling in McIntyre v. Ohio Elections Commission (1995), says the EFF, in which the Court ruled that an Ohio statute prohibiting “campaign literature that does not contain the name and address of the person or campaign official issuing the literature” was unconstitutional. Noting that ”[the] decision in favor of anonymity may be motivated by fear of economic or official retaliation, by concern about social ostracism, or merely by a desire to preserve as much of one’s privacy as possible,” the Court wrote:

Protections for anonymous speech are vital to democratic discourse. Allowing dissenters to shield their identities frees them to express critical minority views … Anonymity is a shield from the tyranny of the majority … It thus exemplifies the purpose behind the Bill of Rights and of the First Amendment in particular: to protect unpopular individuals from retaliation … at the hand of an intolerant society.

Jump three decades further back to Talley v. California (1960), a Court case involving a similar Los Angeles ordinance relating to handbills (fliers) and a requirement that they include the full names and addresses of sponsors (the Court voided the ordinance). Writing for the Court, Justice Black noted:

Anonymous pamphlets, leaflets, brochures and even books have played an important role in the progress of mankind. Persecuted groups and sects from time to time throughout history have been able to criticize oppressive practices and laws either anonymously or not at all.

Moreover, Black noted that the Federalist Papers, “written in favor of the adoption of our Constitution, were published under fictitious names,” i.e. had anonymous speech been unlawful at the time, authors Alexander Hamilton, James Madison and John Jay would have been forced to disclose their real names (or the Papers would perhaps have simply remained unpublished)

“It is plain that anonymity has sometimes been assumed for the most constructive purposes,” concluded Black.

So the proposed New York legislation is a head-scratcher. Wired notes that it stems from an attempt to combat cyber-bullying, referencing an opinion piece by New York Republican Assemblyman Jim Conte, who argues the bill would “[turn] the spotlight on cyber-bullies by forcing them to reveal their identity or have their post removed.” And Betabeat reports that the bill started with New York Assemblyman Dean Murray, who was himself anonymously accused of domestic violence toward his ex-wife and son in 2010. “The thing that disturbed me the most about it was, once everything was proven false, there was no way to get the comments down,” said Murray. “The important thing here is to give the victims a voice and an opportunity to protect themselves.”

Good intentions or no, UCLA law professor Eugene Volokh tells The Daily Caller that the bill won’t pass Constitutional muster, referencing the Talley v. California case and noting that there’s already precedent for unmasking libelous commenters. “If you say something anonymously and it is libelous, I could go to court for an order to identify you,” he told TDC.
Posted by joe levin at 7:52 AM