President Obama to rabbis: I'm vilified because of Muslim name 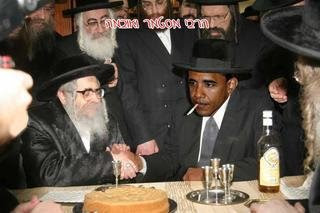 
WASHINGTON – US President Barack Obama met with a group of Conservative rabbis and Conservative Movement leaders on Tuesday in the Roosevelt Room of the White House.


The wide-ranging discussion included a focus on Israel, Iran, and domestic concerns. The president and his chief of staff Jacob Lew spent an hour answering questions from Conservative leadership from across the country.

During the meeting, Obama told the rabbis that when he was running for Senate some accused him of being the Jewish lobby's "puppet" because of his many Jewish associates in Chicago. Now, he said, the Republicans are trying to portray him as not being supportive of Israel by stressing the fact that his father was Muslim and he has a Muslim name, as well as by claiming that he had been overly aggressive in pushing Prime Minister Benjamin Netanyahu to promote the peace process with the Palestinians.


According to the US leader, he had Israel's best interest in mind.

The president further told the rabbis that as a senator he fully backed legislation aimed at preserving Israel's qualitative military edge.

During the meeting, one of the rabbis told Obama that he has a gay son and thanked the American leader for publicly supporting gay marriage.

"The president shared his sense of personal connection to the State of Israel and his deep knowledge and appreciation of Jewish tradition,” said Rabbi Julie Schonfeld, executive vice president of the Rabbinical Assembly (RA), which is the international umbrella organization for Conservative rabbis. “He especially encouraged us to carry forward Judaism’s message of communal responsibility and the religious mandate to seek the welfare of all people in society.”

During the meeting, rabbis asked questions on subjects including the


Rabbi Jack L. Moline, public policy director of the Rabbinical Assembly, said “The opportunity to speak with candor and depth to the president was a privilege especially at a time when we are usually limited to (sound bites) and media selectivity."
Posted by joe levin at 5:17 PM