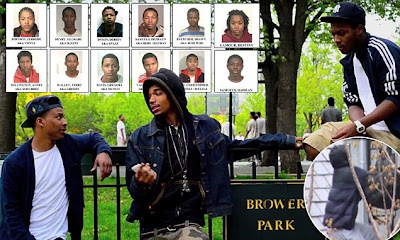 NEW YORK -- Police have arrested 14 young men ages 13 to 20 in a burglary spree that they say culminated in the gang rape of a woman in Brooklyn.


The suspects, allegedly members of the so-called Brower Boys burglary crew, are charged in a string of burglaries and assaults.

The gang members allegedly used fire escapes to access their victims' apartments in the Brower Park area of Crown Heights and Bedford-Stuyvesant, looking for open windows and ringing doorbells to ensure no one was home. Police say that in one instance, they viciously gang raped a 22-year-old woman who they surprised in her Bed-Stuy home.


The suspects were tracked down thanks, in part, to social media. The alleged gang members reportedly followed news accounts closely and joked with one another that they might be next.

Kelly said a police officer friended the burglars to the point where he learned their next move, which is how the NYPD caught them on video in the act of a burglary in progress. They were taken into custody on site.

Police say there was at least one among the gang's friends who didn't have much stock in Facebook's confidentiality, posting, "'If they was coming after the Brower gang, you all just gave yourselves away," after one of suspects joked, "They are coming after Brower next."

Another suspect complained, "Don't say that...look at my facebook name." It was signed "Brower Boy body-bags."


One 18-year-old with the Facebook name "Pretty Boy Sleepy" posted videos and photos of himself with a gun.


In another instance, police say the Brower Boys argued on Facebook over a laptop and other proceeds of a burglary.
Posted by joe levin at 3:03 PM