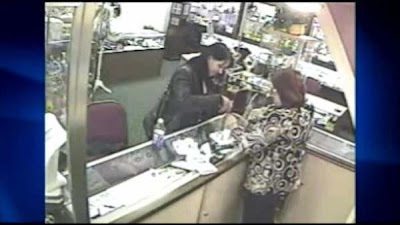 MONSEY -- Police have arrested 28-year-old Natalia Kaledzi in connection to a brazen diamond theft in Monsey. Officials say she walked into a local jewelry store not once, but twice and left with thousands of dollars worth of merchandise.


Kaledzi was charged with two counts of grand larceny

Kaledzi had a unique way of getting away with the goods. Surveillance video starts with a woman walking in through the front door of the jewelry showcase in Monsey, but she is not a paying customer. She's a cool customer and a brazen thief.

Laurie Weiss was in her jewelry store last week when the suspect came in saying she wanted to buy a diamond ring. Since it was near closing time, Weiss had them in the safe in display racks.


The suspect slid a mirror over to act as a shield while Weiss turned to get a bracelet the woman had asked to see. The distraction allowed the thief to calmly place a fake diamond ring in the display while pocketing the real one.

This original theft is only a quarter of the story because the same woman returned to the store the very next day and stole three more rings, duping other store employees. The rings are valued at approximately 5-thousand dollars each - a 20-thousand dollar hit to Weiss' business.

http://privateinvesigations.blogspot.com/2012/05/monsey-police-search-for-diamond-bandit.html
Posted by joe levin at 8:28 AM