Police at a scene of a Crown Heights Brooklyn shooting. 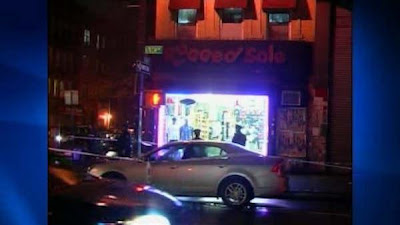 
A 12-year-old and a 34-year-old man were caught in the crossfire as a result of a beef between a Crown Heights store employee and a man who lives in the neighborhood, who, witnesses said, sometimes over-stays his welcome inside the establishment.

Police tape enveloped the outside of the hat and sneaker store where the 12-year-old was shot in the leg and the 34-year-old man took a bullet in the arm, both unintended targets. It wasn’t immediately clear if both victims were walking outside or were inside the store, Hennessey reported, but according to police both were expected to be fine.

People associated with the store said the man would often stay inside the shop for hours at a time, causing, in this case, the employee to get annoyed, leading to the rift.

“I think they got in trouble, by words, had words and the guy apparently threatened our employee, that he would come back and shoot him, and then he actually came back with a gun,” said Steve Park, a friend of the store owner.


That employee, Kenneth Meeks, apparently had a gun as well, police said, but it was unclear if the bullets from Meeks’ gun were the ones that struck the 12-year-old boy and the 34-year-old man. Charges against the store employee are pending, police said.

The other man involved in the confrontation is still on the loose, police said.