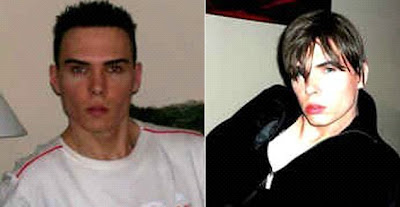 Montreal police have named Luka Rocco Magnotta, 29, in the gruesome case, in which a severed human foot was sent to the headquarters of Canada’s ruling Conservative party and a blood-soaked package with a hand was stopped by police at a Canada Post terminal.

Police found a torso Tuesday in a locked suitcase behind a Montreal apartment building.

The building’s manager, Eric Schorer, said Magnotta had been living in the building for almost four months.

“He seemed like a nice guy,” Schorer told The Canadian Press.

Several residents in the building told the Montreal Gazette that police believe the torso belongs to an Asian man who also lived in the apartment building and is apparently missing.

A video claiming to show Magnotta stabbing a man several times on a bed was sent to the Montreal police, the Gazette reports.

Montreal police commander Ian Lafreniere told reporters Wednesday that Magnotta does not have a criminal record.

“The suspect and victim knew each other,” Lafreniere said. “It isn’t linked to organized crime.”

Details on Magnotta’s whereabouts and motives are hazy.

Police have not released the victim’s name. An autopsy will be performed to determine how the victim was killed and when the body was dismembered.

“Some police officers have never witnessed a crime such as this,” Lafreniere told The Associated Press.

The suspect has a murky past.

Authorities told the AP that the suspect is also known by the names Eric Clinton Newman and Vladimir Romanov. He is 5-foot-8 with blue eyes and black hair, cops say.

Magnotta has also been accused online of killing kittens and posting videos of their deaths on the Internet, the Gazette reports.

The suspect has responded to those accusations on his website, www.Luka-Magnotta.net.

“Many hoax websites are created using my image and name, posing as me to seem more believable in respect to the type of audience these websites have,” Magnotta wrote in an article titled “Cyber Stalking.” “I feel I don’t need to list them specifically but people need to be told, not to believe what they read and to take it as fact.”