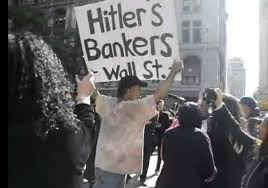 OWS - Every demonstration has its kooky and sometimes offensive signs. But some critics say that many at Occupy Wall Street have looked the other way when it comes to anti-Semitism.

The CEO of Adbusters magazine Kalle Lasn is said to be one of the founders of Occupy Wall Street. He wrote: "Does the Jewishness of the neocons influence American foreign policy in the Middle East?" Lasn came up with a list of people he calls the 50 most influential neocons and wrote: "half of them are Jewish." He added: "... if we see maleness, whiteness, Jewishness of intellectual thuggery then let us not look the other way."

Assemblyman Dov Hikind said he is shocked at the silence over anti-Semitism.

Fox 5 reached out to Kalle Lasn of Adbusters, but he did not respond to our request for an interview.

We did not see any anti-Semitic signs in Zuccotti Park Monday, although we have seen some in the past.