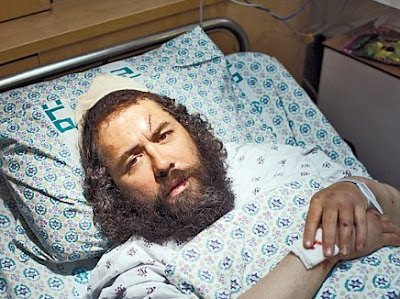 Mea She’arim - Residents of the Mea She’arim neighborhood in Jerusalem fear the violence that has erupted between two ultra-Orthodox sects will grow and complain the police are not protecting them.

On Tuesday night a group of Hasidim brutally attacked Avraham Hirschman, 36, a father of six, with clubs, kicks and blows. Hirschman was hospitalized with fractures and other serious injuries.

“They said we’ll murder you,” Hirschman told Haaretz. “The police knew in advance they were planning the attack but didn’t lift a finger.”

The assault was part of a violent dispute between members of the large Hasidic Gerrer dynasty and the fanatic Sikrikim group (named after the Sicarii sect in 70 C.E. ) in Mea She’arim.

Thousands of ultra-Orthodox Jews demonstrated in the neighborhood following the attack and many prayed for Hirschman’s recovery. Many protesters condemned the Gerrer Hasids for the attack, but the ultra-Orthodox newspapers of all the factions are ignoring the affair and some ultra-Orthodox figures have even expressed sympathy for the perpetrators rather than the victim.

Yehuda Meshi-Zahav, head of the voluntary emergency response organization Zaka, came out openly against Hirschman and his colleagues. “They must be beaten up. The Sikrikim understand only force. They can’t employ violence all the time and then shed crocodile tears,” he said.

The Batei Warsaw quarter in Mea She’arim was built in the Ottoman period as a hostel for yeshiva students from Poland. Their families receive tiny apartments for key money or low rent. The Polish Gerrer dynasty, which always had people in the neighborhood committee, has gained almost complete control of it in recent years and is now planning to expand the quarter.

Although they do not recognize the state or its institutions, the Batei Warsaw tenants, most of whom belong to other ultra-Orthodox factions, have filed a court suit to stop the Gerrer Hasids’ expansion. This move is believed to have sparked the recent hostilities.

Nobody was surprised by the attack this week. A week and a half ago vandals spread glue on Gerrer Rabbi David Alter’s door, preventing him from going out to Hoshana Rabbah prayers. Everyone knew the Gerrer Hasids were out for revenge.

Gerrer Hasids visited Mea She’arim twice in recent days, looking for the perpetrators who had glued Alter’s door. The police did not stop them from entering the neighborhood, although the residents warned them in advance of the Gerrer people’s intentions. Failing to find the glue vandals, they chose Hirschman, a major anti-Ger activist, as their victim.

Six months ago an angry crowd burst into Hirschman’s house and set it on fire. His wife and baby daughter were rescued in the nick of time.

On Tuesday night he was heading home from the synagogue when a group of 10 or 15 Gerrer Hasids, some of them wearing masks, attacked him, he said. They beat him brutally even after he lay bleeding on the road. He recognized at least one of them and gave his name to the police, but they did not arrest anyone, he said.

Several suspects of violence in the Batei Warsaw dispute have been arrested in recent months, none of them a Gerrer Hasid. A police source said a Gerrer man was questioned about the arson in Hirschman’s house, but was not arrested.

“We’re optimistic of finding the attackers,” the source said.
Posted by joe levin at 8:51 AM