Hasidic Jewish men sit in front and women sit in back on the B110 bus between Borough Park and Williamsburg in Brooklyn. 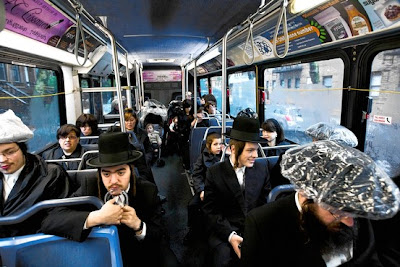 It looks like little has changed on the B110 Williamsburg-to-Borough Park bus line, where self-segregation among the sexes remains as entrenched as ever.

It took less than a minute before a man questioned my presence on the front of the bus on Wednesday.

"Excuse me," said the gentleman, who appeared to be an ultra-Orthodox Hasidic Jew, as I squeezed in beside him. "Ladies in the back."

"Is there a rule?" I asked him, as the women sitting in the back half of the B110 bus peered curiously at me, the only non-Jewish person on board.

"Please, ladies in the back," he said, visibly uncomfortable.

The man switched to sit across from me.

"It's not a rule; it's a rule amongst us," snapped another man.

I identified myself as a reporter and was hoping to engage in a conversation with the men, all but one who appeared Hasidic, wearing traditional black hats, side curls and beards.

But there was no conversation. A woman boarding the bus at the next stop in South Williamsburg saw me and stopped. "The ladies are sitting in the back," she said, beckoning me.

So much for a Rosa Parks moment. It was the back of the bus for me.

"Thank you, we appreciate it," said the woman smiling as I followed her to the back.

The B110 has generated a lot of controversy over the past week, sparked by a story in the New York World, a Columbia Journalism School publication. The story hit the blogosphere and reached the attention of Mayor Michael Bloomberg, who declared that the practice was indisputably not kosher.

The New York City Commission on Human Rights is conducting an investigation, and the city's Department of Transportation has instructed the operator to ensure that the practice ends.

The B110 is in an unusual situation. It caters almost exclusively to the Hasidic Jewish community, shuttling residents back and forth between South Williamsburg and Borough Park. Still, it's open to anyone who pays the $2.50 cash fare.

It's not subsidized by the city. Rather, the route is operated by a franchisee, Private Transportation Corp. The company is required to comply with all applicable laws, including prohibiting any type of discrimination, unless it has received an exception.

What's surprising about my experience on Wednesday is it came one day after Jacob Marmurstein of Private Transportation sent a letter to the city stating that the company "does not support, promote or condone any conduct that is discriminatory in nature."

Mr. Marmurstein went on to say that the company will confirm its policy of nondiscriminatory conduct with company personnel and will place signs on the buses to that effect.

Apparently, they haven't done such a good job with the communication part. When I asked the bus driver if there were a rule requiring women to sit in the back, he acted like he had no idea what I was talking about, saying only, "Oh, I don't know about that."

I also didn't see any signs.

A week earlier, the city informed Mr. Marmurstein in a letter that "allowing passengers to harass women who choose to ride in any part of the bus, is not permitted on franchised buses" and could lead to a termination of that agreement.

The bus driver didn't interfere in the conversation I had, but he most likely didn't hear it. And surprisingly none of the riders I spoke with were aware of the controversy generated by the bus.

Now, turning the discrimination argument on its head, it would seem to some in the Hasidic community that being forced to sit next to a woman discriminates against their religion, which follows a tradition of separation of the sexes.

That is the argument several women made to me as I sat in the back with them.

"It's really for religious reasons, we keep separate," said a woman who declined to give her name. "At weddings, parties, we're so used to it. It shouldn't bother anyone. It's just our religion."

The reasoning, she said, is their idea of modesty.

The women said if a rider who isn't familiar with their customs gets on and sits in the wrong section, they usually will ask nicely if they mind moving. They said they've never witnessed someone who didn't oblige.

"I don't know, they might think we're crazy," said the woman to a rider behind her. "They'll think it's we're like the Amish, like we're behind the times. But we're not."

"I've been taking this bus eight years and never a problem," said another woman, who also declined to give her name. "There's always a lot of respect. It's self-understood. This is how we grew up. It's the way we are."

As she said this, her husband slid into a seat that looked like the first seat in the women's section. No one was sitting next to him, so it appeared to be OK. "There's no women's part and there's no men's part," said Yiachneil Bichchei, a 20-year-old Williamsburg resident. 'There's a bus. Everybody is allowed to sit where they want."

Not all Hasidic Jews—by no means a monolithic community—agree or follow such strict self-segregation.

Chaya Chanin, a Crown Heights resident who owns the popular Frock Swap store, has never ridden the B110 but doesn't agree with the separation. "If I were some outsider, I would feel uncomfortable being pushed to the back," she said.

"It would bother me to a certain degree if I had to ride the bus every day," she added. "On the one hand, I don't need to be sitting next to the men, or have a desire to. But I wouldn't want to be squished in the back of the bus."

On the bus ride back from Borough Park to Williamsburg, I again sat in the front. This time no one said a word to me, though I got a few peculiar looks. Only one man would sit next to me. Another man offered him his seat moments later, standing up instead.

I'm not sure why the difference. Before departing from Borough Park, a Hasidic man waved his hands in the air and yelled out "No More Segregation."

Could he be their Rosa Parks?

It was unclear if he was joking or serious.
Posted by joe levin at 9:18 AM