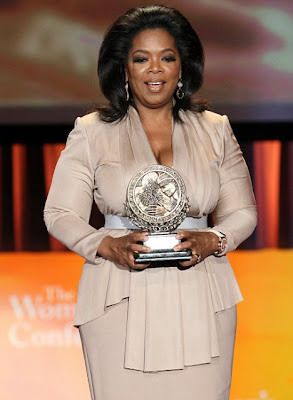 Oprah Winfrey, in New York as part of a new television series, “Oprah’s Next Chapter,” that premieres in January, visited the neighborhoods of Crown Heights, Borough Park and Brooklyn Heights for a glimpse into the daily life of Chasidic Jews and how their intense spiritual devotion informs and strengthens their dealings with the outside world.

Winfrey sat down with two families as part of her visit, enjoying a traditional meal as well. She also discussed communal affairs with five women and toured a Chabad-Lubavitch run Jewish ritual bath, known as a mikvah, in Brooklyn Heights.

A departure from the talk show format that propelled her rise to stardom, “Oprah’s Next Chapter” will air on OWN: Oprah Winfrey Network. According to producers, it will focus on her journeys outside the studio as she takes conversations with real people, newsmakers, celebrities and thought leaders to a new level.
Posted by joe levin at 8:42 PM