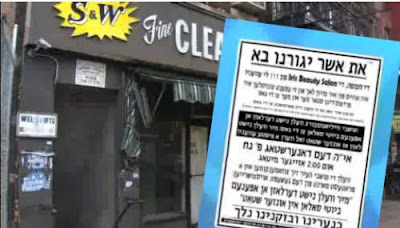 Extremists in Williamsburg are being called "the Taliban" for once again protesting against Iris Salon & Spa and its owner Iris Sherman, a Crown Heights resident.

WILLIAMSBURG, BROOKLYN — Occupy Wall Street isn't the only protest attracting media attention in our area. A religious group in Williamsburg organized a protest of a hair salon on Lee Avenue.

PIX11 News obtained a controversial flyer in Yiddish, circulating around the predominately Orthodox community in Williamsburg. The flyer asks people to protest the Iris Salon, at 311 Lee Avenue, because it is "immodest" and is allegedly offensive to the surrounding religious community.

PIX11 News visited the salon. At the site of the salon, there is only a outside saying "Cleaners" and curtains covering all the windows. The owner of the salon refused to comment on this story.

The lastest protest of the group in front of the salon, was back in May when almost a hundred people gathered.

Pictures of the last protest are posted on a Facebook page created by supporters of the salon.

The page says, "the Willamburg Taliban" is attacking the salon ownership and, "a small group of extremists is seeking to terrorize and honest businesswoman."
Posted by joe levin at 12:41 PM