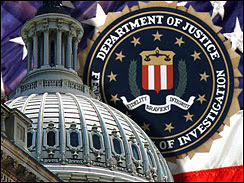 The Federal Bureau of Investigation has opened an investigation into messages posted online offering rewards for the murder of President Obama and his family as well as former President George W. Bush, members of the Bush administration and specific members of Congress, an FBI spokesperson told CBS News. No one has yet been arrested.

The New York Times first reported that the FBI and Capitol Police were investigating the messages, in which "a Google user offered up to $100,000" for the killings. The user also reportedly called for bombing of iconic monuments, bridges and buildings, including the Washington Monument, the Brooklyn Bridge, American embassies and the headquarters of defense contractors. He or she urged Americans to set the bombs and "KILL as many FBI, CIA, DNI and NSA PSYCHOPATHS as possible," the Times reported.

Republican Rep. Bobby Schilling of Illinois was among those targeted, with the user offering $75,000 for his assassination, The Hill reported. After learning of the threat Tuesday, the lawmaker and his family began "taking recommended precautions while the situation is investigated by relevant authorities," his spokesperson told the newspaper. Also reportedly targeted were Republican Rep. Mike Coffman of Colorado and Republican Rep. Mike Pence of Indiana.

No evidence has been released indicating that the threats were credible or serious.
Posted by joe levin at 7:43 AM