Girl Loses 205 Pounds in Hopes of Finding a Shidduch

Before and after, Merav Yitzhaki a young woman affiliated with the Chabad Hasidic movement 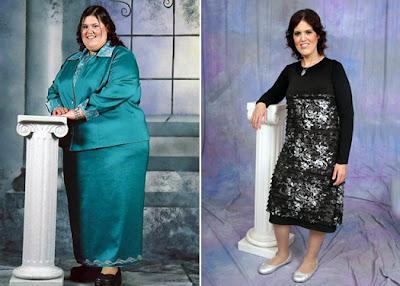 Is there anything people won't do for a Shidduch? Merav Yitzhaki, 25, had bariatric surgery, gave up on snacks and pastries and lost more than half her weight. Now she awaits her suitor. A Lubvitcher girls speaks openly about her obesity and her struggles.

Love, so they say, changes people forever. But a changeover like the one undergone by Merav Yitzhaki, a young woman affiliated with the Chabad Hasidic movement, must have required some help from God as well.

As part of her attempts to find a proper match, Merav had a series of operations, lost 93 kilograms (205 pounds) and redefined the concept of a diet. Now, with her new look, she feels available for a serious relationship (preferably with a Chabadnik, of course).

“I was always a fat girl,” says Merav, 25, of Netanya. “My parents tried to encourage me, saying that being fat is not an offense, and I preferred to just ignore my weight and eat.”

And Merav did eat, until at the age of 21, when religious girls start seriously thinking about getting married, she reached the weight of 155 kilos (342 pounds).

“I was warned that I should be thin when I enter the 'shidduch' world, so that I could be matched to a good-looking guy. But I had already accepted the fact that I would probably be matched to a fat guy and that's it.”

But Merav didn't really accept the situation, and at some point found herself on the operating table at the Assuta hospital, where a ring was adjusted on her stomach to reduce her appetite.

“I started taking things seriously and eating in a healthy way, and with the help of diets the weight just kept falling off until my dietician stopped me,” she says.

And then, about a year ago, she looked in the mirror and saw a girl weighing 62 kilos (137 pounds) with a lot of excess skin, which used to cover her 155 kilos in the past. “I looked really weird, only in a different way this time,” she says.

In order to look her best and fit into the dating world, Merav was treated by Dr. Tali Friedman, a senior plastic surgeon from the Assia Medical Center in Tel Aviv.

“The problem of obesity is extremely relevant to the haredi-religious sector these days,” says Dr. Friedman. “I have been exposed to many patients from the sector who have undergone weight loss treatments and body shaping. Merav is a very impressive and highly motivated young woman, who has done very well.”

At the end of the treatments, Merav said goodbye to the excess skin as well and finally joined the world of single women and men.

“I have never gone on a date before,” she says. “Even when I had already lost weight, I wasn't offered any matches because people didn't know about it. But I know that God will send me what I deserve.”

In the meantime she's happy (“I thank God Almighty 10 times a day”) and recently began working as –believe it or not – a pastry cook. “That's what it's about, watching but no touching,” she laughs.

To conclude: Sense of humor – check; new look – check. All that's missing is a good ultra-Orthodox groom.
Posted by joe levin at 4:57 PM