Shaul Spitzer of New Square, left, with his attorney Kenneth Gribetz, at the Town of Ramapo Court on Wednesday. He was arraigned on a charge of violating a court order to stay away from Aron Rottenberg's family 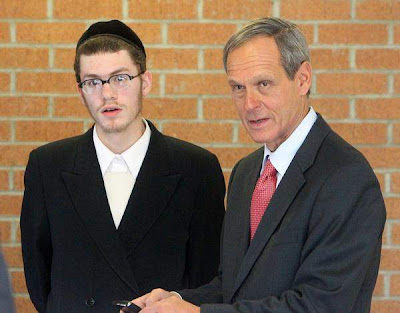 The 18-year-old New Square man charged with trying to murder a village dissident through an arson attempt was arrested Wednesday on a charge of violating a court order to stay away from the family.

Spitzer has been indicted on felony charges of trying to set Aron Rottenberg's Truman Avenue house in New Square on fire at 4:15 a.m. May 22.

During a confrontation outside the house, one of Spitzer's incendiary devices exploded, burning Rottenberg over 50 percent of his body, police said. Spitzer, too, suffered severe burns to his arms and hands.

Rottenberg and his family became targets of late-night protests and vandalism by residents loyal to Grand Rabbi David Twersky from September 2010 to a week before the alleged attempted arson in May.

Rottenberg and other male residents had drawn the ire of religious leaders and Twersky for publicly refusing to follow the rabbi's edict that his followers pray during the weekly sabbath in the village's only synagogue.

Rottenberg instead led a contingent that prayed with residents at the Friedwald Center on New Hempstead Road, less than a mile from New Square.

As part of Spitzer's $300,000 bail, the judge signed an order mandating Spitzer stay away from the Rottenberg family, their home and business.

Police on Wednesday accused Spitzer of walking outside Aron Rottenberg's Truman Avenue house on Oct. 4 at 3:15 p.m. in violation of the court order.

Acting on a criminal complaint signed by Lynch, police arrested Spitzer based on a photograph taken of him and three friends walking in front of the Rottenberg house.

The police investigated and after doing interviews, they made the arrest on Wednesday.

The Rottenberg family had told the authorities about the photo, said Moshe Eilbaum, who is Rottenberg's son-in-law.

"We are pleased that law enforcement is enforcing the order of protection, though we wish enforcement would have been more rapid," Eilbaum said.

Rottenberg, a plumber, is getting feeling back into his hand and is pursing his civil lawsuit against Twersky, Spitzer and others.

Gribetz said on Wednesday that Spitzer has been told not to go near the Rottenberg house. He said the community's one synagogue and the grand rabbi's house are near Rottenberg's home.

"This was an innocent mistake," Gribetz said. "My client wasn't aware he was in violation.

"He didn't harass anyone or go on the property," Gribetz said. "He shouldn't have been there. It will never happen again."

Gribetz has said he expects the case to go to trial.

He has argued that Spitzer is contrite and didn't intend to kill or hurt anyone or even try to burn down the Rottenberg house with a gasoline-soaked device.

Rottenberg blames the grand rabbi for inciting the violence against him.

He has said he and his family have become social outcasts in the Hasidic village, with his children kicked out of school and his business boycotted.

At the time of the arson attack, Spitzer lived in the grand rabbi's house and did butler work for the Hasidic Jewish leader. The rabbi later condemned the violence.

There also are accusations being investigated that young men like Spitzer enforce the edicts of the grand rabbi and his inner circle, including compliance with social rules — like dress codes — and worship practices.

Ramapo police have been investigating the vandalism against Rottenberg and any conspiracy to deny him and others their rights to practice their religion.

The FBI has been monitoring the case and working with Ramapo police.
Posted by joe levin at 5:56 AM