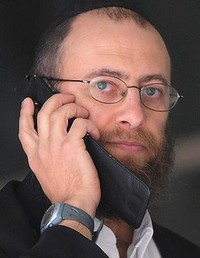 More people have come forward alleging they were sexually assaulted by a security guard at a Melbourne Jewish school, a court has heard.

Samuel David Cyprys, 43, who was a guard at Yeshivah College in East St Kilda, is charged with 29 counts of indecent assault and gross indecency relating to former students.

Two further Victorian complainants had come forward since the charges were laid, and statements were still being taken from four other alleged victims, Detective Senior Constable Lisa Metcher told the Melbourne Magistrates' Court on Wednesday.

The additional statements were being taken from one alleged victim in Brisbane and three complainants now living in the United States, Ms Metcher said.

The evidence emerged in an application by police to revoke Cyprys' bail, which was refused.

It was alleged that Cyprys was seen crossing the road with two children on October 13, which would have breached his bail conditions forbidding contact with any children under 16.

Adam Wright, the personal bodyguard for millionaire Melbourne businessman Joseph Gutnick, told the court he saw Cyprys crossing Hotham Street in East St Kilda accompanied by a boy and a girl about 9.30pm.

He also said a member of the Jewish community had informed him that Cyprys had attended a synagogue attached to Yeshivah Gedolah.

The court heard Yeshivah Gedolah was a tertiary college also known as the Rabbinical College of Australia and New Zealand.

Mr Wright said after he began working for the Gutnick family in 2003, he was responsible for ensuring Cyprys had no involvement with any of Mr Gutnick's synagogues, because of allegations he had molested children.

Magistrate Luisa Bazzani refused the application to revoke bail because she believed Mr Wright had been mistaken when he thought he saw Cyprys.

Cyprys' brother and sister-in-law told the court that he was at their home on October 13 celebrating the Jewish holiday Sukkot until after midnight. The same account was given by another guest.

Ms Bazzani amended his bail conditions to allow Cyprys to attend synagogues located next to schools when the schools were closed to students.

Cyprys, who is also a locksmith, is alleged to have committed offences against boys aged seven to 17 between 1984 and 1991.

He will appear in court again in January for a committal mention.
Posted by joe levin at 6:12 AM