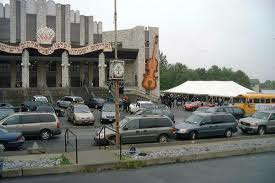 The United Talmudical Academy is being sued for $200 million by a bankruptcy trustee who claims the UTA helped a big donor conceal bank fraud at the contributor’s company -- and the case is expected to go to trial early next year.

The trustee claims in Brooklyn federal bankruptcy court records that as far back as 1997, the UTA was helping the family of Victor Jacobs hide the fact that his Allou Distributors was cooking its books to boost its line of credit from a lender.

An observer of the legal situation told The Post that the UTA could be forced to shut its doors if the trustee wins the case.

“This organization has substantial amounts of real estate in Brooklyn and Queens. The trustee would have an obligation to collect,” the observer noted.

The UTA’s lawyer, Thomas Kissane, said, “[The] UTA had no knowledge of the misconduct at Allou.”
Posted by joe levin at 6:13 PM