Workers from the Chesed Shel Emes clean the basement of the Friedlander home in Cross River. 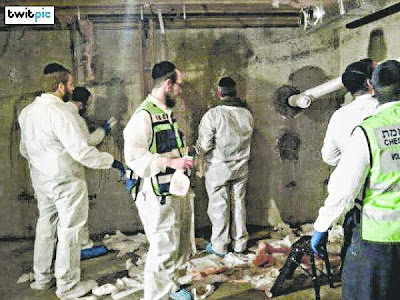 'It can't be real': Gary Perez, Amy's father, far left, sobbed during the ceremony and was unable to complete the kaddish, the Jewish prayer for the dead 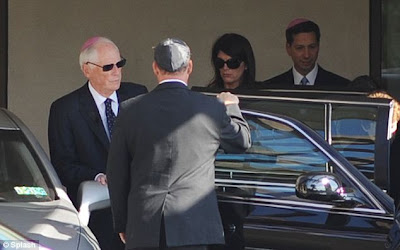 Nearly six months before he killed his family, Sam Friedlander walked into a Yonkers gun shop far from his northern Westchester home and law office and purchased a 12-gauge shotgun and two boxes of ammo, actions that prompted his father-in-law to speculate Monday that the killings were planned.

"It must have been premeditated," said Gary Perez, Amy Friedlander's father.

Friedlander bought the Remington 870 on April 29, a few weeks after he and his wife had reached an agreement on child custody as part of their divorce proceedings. Amy Friedlander was given physical custody of Molly, 10, and Gregory, 8, while Sam was granted liberal access to the children, Amy Friedlander's lawyers have said.

"I know they had come to an agreement on access to custody at the beginning of April, and I know he wasn't too happy about it," Perez said. "But I don't know if that had any bearing on it."

Ken Novenstern, who represented Sam Friedlander for a time in the divorce, said Monday "that his children were really the most important thing in the world to him." Like many others, Novenstern described his former client as mild-mannered.

Anthony Galimi, the owner of All County Sporting Supplies on Yonkers Avenue, personally sold Friedlander the weapon and two boxes of 00 buckshot ammunition.

He said he did not remember Friedlander specifically and was stunned to find out the firearm typically used for hunting was employed in the murder-suicide that has made headlines across the country.

Friedlander bludgeoned his wife to death in the master bedroom of their luxury Cross River Colonial, shot his two children in their beds and then covered them with their bedspreads before going to the unfinished basement and putting the gun to his own head. Their bodies were discovered Oct. 18.

Amy Friedlander and her children were buried Sunday in Trevose, Pa., where she grew up.

Officials with the Westchester County Medical Examiner's Office said Monday night that Sam Friedlander's body had been claimed by a funeral home Monday. The name of that home was unavailable, officials said.

A Brooklyn-based Jewish organization went to the Friedlanders' Lambert Ridge Road home over the weekend to clean up the bloody scene and to follow what they say are the tenets of Jewish law.

Some 10 volunteers with Chesed Shel Emes spent about two hours Saturday night scouring the bedrooms and basement in an effort to return any of the decedents' remains to them, said Rabbi Mayer Berger, Chesed's director of operations.

"According to Jewish law, all remains have to be buried with the person," Berger said on Monday. "If anything is missing from him or her, he or she is not complete."

The group also posted at least three photos on Twitter of their crew inside the house, including two images of them working in the unfinished basement and another of a volunteer on his knees scraping a blood-stained carpet in what appears to be the master bedroom. Police have said there was a violent and bloody struggle in the room where Amy Friedlander died.

Gary Perez had agreed to allow Chesed Shel Emes into the house but was furious when he learned Monday about the Twitter postings.

"Oh my God, I'm shocked," he said. "It's just beyond belief. It's bad enough what happened to my daughter and grandchildren. This just tears my heart out, whatever's left of my heart."

The Twitter postings involving the Friedlander home were removed Monday.

After learning of the Lewisboro tragedy, Chesed Shel Emes, a more than 20-year-old organization that specializes in recovery and burial, contacted the families of the dead to offer their services, Berger said. An attorney for Amy Friedlander, he said, returned the call and opened the house for them to do the recovery.

Berger said they gave the remains to the attorney in bags but did not know if the remains were indeed buried with Amy Friedlander and her children.

Berger said they also contacted Sam Friedlander's family and offered to conduct a burial for him. They were told his brother would be claiming the body and taking care of arrangements, Berger said, adding they would check back in a couple of days to see if anyone had indeed claimed him.

We don't care what his previous actions were," Berger said. "As long as he is Jewish, he deserves a proper Jewish burial." Berger declined to comment on the specifics of the cleanup.

Chesed Shel Emes, which means "charity of truth," has more than 500 volunteers in 10 states and conducts about 30 cleanups and 150 burials per year, Berger said.

Burial services are done for the unclaimed and for those who can't afford one, Berger said. They rely solely on donations to run their operations, he said.

State police said they were aware of the recovery effort though they had no contact with Chesed. Once the autopsies were completed, the house was released, said Capt. Lisa Loughran.

We really try to honor any cultural traditions but not compromise the crime scene," she said.
Posted by joe levin at 5:16 AM