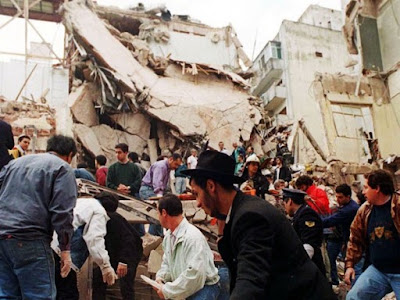 These are images that we had never seen: they show the scene before police arrived and firefighters,” said Daniel Berliner, director of Agencia Judia de Noticias (AJN), which handed the video to investigation chief Alberto Nissman.

It’s a long video of 50 minutes and the sound is very good,” Berliner told AFP.

A van loaded with explosives detonated outside the AMIA building on July 18, 1994, killing 85 people and injuring more than 300. It was the country’s worst terrorist attack.

“When I saw the reaction of the experts, I realized they had never seen these pictures,” Berliner said, stressing that it was for investigators to decide what the video could bring to the investigation.

The VHS video was made by someone working at a nearby office building who left work, camera in hand, as soon as he heard the explosion, according to Berliner. The man had “kept the tape in a desk drawer” ever since.

The initial investigation into the AMIA bombing was thrown out by Argentine courts after an investigating magistrate was found to have tried to bribe a witness.

But in October 2006, a second investigation saw eight Iranian officials indicted, with Argentine prosecutors alleging that the attack was planned and financed in Tehran and carried out by a Hezbollah cell.

In July, the Iranian foreign ministry denied the officials were involved but said it was prepared to hold a “constructive dialogue” and “cooperate with the Argentine government to shed all light” on the attack.

The Argentine government said at the time that it would study the offer, but has so far made no official reply.

Two years before the AMIA attack, 29 people were killed in a bombing of the Israeli embassy in Buenos Aires, an attack that has never been solved.