Handcuffed: Lopez was arrested at gunpoint and charged with reckless driving 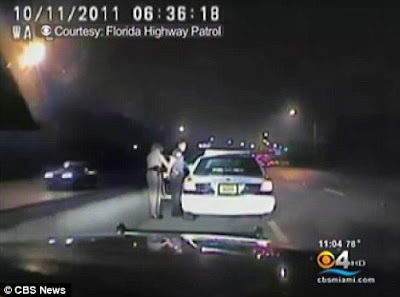 A Miami police officer is accused of driving 120 mph on a highway because he was late for his off-duty job working security at a school.

The Florida Highway Patrol says officer Fausto Lopez was arrested at gunpoint after leading police on a brief high-speed chase.

She drew her gun for her own safety based on the actions of the driver,' said spokesman Sargent Mark Wysocky of the highway police trooper D.J. Watts approached the driver.

According to a police report, a trooper spotted a patrol car changing lanes in a dangerous manner earlier this month.

The incident occurred at 6.33am on October 11, when Lopez had just finished his police shift.

Lopez, 35, was driving in the southbound lane in his police car while wearing his police uniform.

The police report says the patrol car ignored warnings to pull over and led a brief high-speed chase before stopping near Hollywood.

Lopez was charged with the crime of reckless driving, which is categorized as a second degree misdemeanor.

Miami police spokesman Delrish Moss told The Associated Press on Saturday that any administrative action against Lopez will be taken after the outcome of the criminal case.

In the meantime, Lopez is still assigned to regular duty as a Miami police officer 'because at this point it's a traffic offence,' Mr Moss added