Bernard Madoff and wife Ruth at the golfing event in Mexico, when Madoff celebrated his 70th birthday 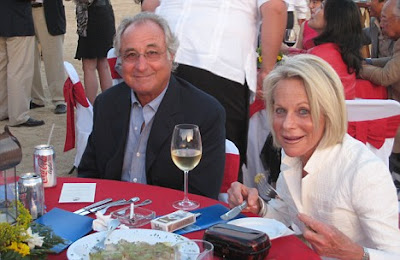 A glimpse inside the heartless, miserable, greedy & vain world of the Madoffs

Bernie and Ruth Madoff met in 1954 when they were teenagers, and from the beginning Bernie criticized Ruth, perpetually, pointing out every minor imperfection in his young bride.

As a result, she led a life in which fear was her overarching motivator: She was so afraid of Bernie cheating, she allowed him only 24 hours of travel alone.

Yet, cheat he did.

For 16 years, he regularly slept with Sheryl Weinstein, a top executive at the time for a women’s Jewish group, who eventually penned a Madoff tome, “Madoff’s Other Secret.”

Shockingly, it wasn’t her son’s death or the loss of her fortune or her husband’s vile plot and resulting imprisonment that unsettled Ruth the most.

It was the affair.

“It makes me sick to think about it,” she says in “Truth and Consequences,” the latest Madoff tell-all, which hits bookstores tomorrow. “It’s the most hurtful thing that ever happened to me.”

The new book, which The Post purchased Friday, was written by Brooklyn-based author Laurie Sandell with the cooperation of Ruth and her 45-year-old son, Andrew Madoff.

And it paints an ugly picture.

Taken side by side with another tell-all released earlier this month, “The End of Normal” by Bernie’s daughter-in-law, Stephanie, the family comes across as vain, greedy, dysfunctional, and deserving of their misery and each other.

No one comes off as sympathetic -- not Mark, the son who ended his life in shame, not his wounded widow, not Bernie’s slighted wife, no one. They’re quite possibly the most disliked family since the Mansons.

And it all starts with Bernie, the epicenter of the dysfunction.

Ruth summed up their relationship: “I always felt like I was going to be fired.”

She admits her hubby -- an imperial, obsessive-compulsive patriarch prone to wild mood swings -- “ruined our time.”

A neat freak, he insisted on only clean, bare feet on his $7 million yacht.

He would complain about his own grandchildren, who were not allowed in his penthouse for fear of sticky fingerprints and crumbs on the floor.

He particularly hated anything made with metal or that had metal edges, forbidding even a suitcase with a metal rim to be placed on a seat in his private jet.

At work in the Lipstick Building, he would make sure that all the vertical blinds that wrapped around his oval-shaped office were in line.

“Bernie would spend a certain amount of time each day crawling along the ledge at the edge of the windows, lining up the binds,” according to the book.

His obsession with the linear was such that he was known to drop his pants -- in full view of employees -- to check the alignment of his shirt buttons, according to a 2009 Vanity Fair profile.

Once, an employee found Bernie kneeling in the lobby on hands and knees, adjusting and readjusting the rugs until they were perfectly even.

As a family, the Madoffs were like a club, impenetrable and distrusting of outsiders.

When son Andrew’s future fiancée, Catherine Hooper, met his parents for the first time at his brother Mark’s 44th birthday party in 2008, she was greeted strangely by Bernie.

“I want you to know that he’s not from money, despite what you see. I know you think he’s a rich guy, but we’re from nothing. My father was broke. We’re humble people,” he said.

A few months later, when Hooper placed a leather Dior bag on a freshly polished side table on Madoff’s yacht, he blew up.

“The bottom of your bag has round metal feet on it!” he screamed. “If the boat moves, those feet are going to leave a mark on the table.”

She left the room sobbing.

Bernie bothered his son’s wives and partners in other ways.

He ogled Stephanie’s backside when she was pregnant, commenting on how big it was, her book recounts. Her husband, Mark, ignored the crack.

And one day, when Ruth, Andrew, Catherine and Bernie were lounging on the yacht, he complimented Catherine’s body, adding, “But she could have been heavier on top.”

Ruth and Andrew pretended not to hear.

Bernie’s infidelity fueled Ruth’s low self-esteem, and she was paralyzed by the thought of losing her looks, says Stephanie.

She underwent two face-lifts, regular injections of line fillers and Botox and was fitted with veneers for her teeth.

Terrified of putting on weight, she poured salt all over any food that might tempt her but would dig through the trash to retrieve chicken bones to gnaw on, according to Stephanie’s book.

She would also strip coleslaw of its mayo, yet stock the freezer of their Montauk home with her favorite treats, chocolate-covered bananas.

After the scandal broke, Ruth began to drink more, to the point where she’d deliberately slip into what she calls a “rose coma,” Ruth admitted in the new book.

The more she drank the meaner she got, barking commands at her housekeeper and mocking her accent, Stephanie reveals.

Ruth was subservient to Bernie. For 30 years, they regularly dined at Primola on the Upper East Side, the new book says.

Every time, they’d order the same thing (Bernie red wine and chicken, Ruth white wine and fish), leave a 20 percent tip, and be out in under an hour.

The only person who addressed wait staff was Bernie. Even when the owner would come to chat, Ruth’s eyes never left the table.

Bernie’s sons were also cowed by the Wall Street titan, who would end disagreements by reminding them, “In case you forgot, my name is on the door.”

The Ponzi schemer manipulated his sons, pitting brother against brother. At times, he’d lie, telling one the other was angry or upset and visa versa.

On one occasion, when Andrew announced he wanted to leave his father’s firm, Bernie blasted him with a guilt trip: “You can’t do this. You’re abandoning your brother.

This is unacceptable. After everything I’ve done for you!”

“In hindsight,” Andrew says, “it’s obvious that the fact that we were there provided cover. He used us as a shield ... Maybe the people at the firm who were in on it would have panicked if they’d seen us jumping ship.”

Pettiness infused his sons’ relationships with each other, too. Both competed for the affections of their father.

Andrew describes Mark in the book as a “mama’s boy” who spoke to their mom every day in college and deeply feared their dad. He bitterly complains about Mark, “ratting him out” for drinking beer and making out with girls when they were teens

He even takes potshots at his brother’s math skills, which he claims didn’t live up to his own.

“People would watch him fall apart and roll their eyes,” he says.

Another break in the brothers’ relationship came after Mark’s first suicide attempt in 2009, when Andrew callously removed his brother as trustee and legal guardian of his children.

“I cannot risk having you in charge of my kids’ future. You’ve proven yourself untrustworthy in that regard,” Andrew told him.

The Madoffs blame one another for Mark’s suicide at the age 46.

The day he died, Dec. 10, 2010, he was alone with their 2-year-old son, Nicholas, while his wife and their daughter were at Disney World.

It was the second anniversary of Bernie’s arrest, and Mark was devastated by an article in The Wall Street Journal.

But Andrew claims that just days before he died, Mark admitted to his first wife that Stephanie “is about to leave me.”

According to Andrew, Stephanie had met with a divorce lawyer and changed her last name.

For Mark, the prospect of a second divorce was unthinkable. He’d done it once before and couldn’t bear to live apart from his children again, especially without his immediate family to fall back on.”

These days, Ruth spends her night reading library novels, watching Netflix movies and living in terror of chipping a tooth “because she can’t afford to go to a dentist,” the Sandell’s book says.

And even from his North Carolina jail cell, Bernie continues to undermine his wife.

Despite Ruth’s claim that she and Bernie attempted suicide together, he denied it to writer Steve Fishman last year in a New York magazine article.

“I never thought of taking my life,” Madoff reportedly told Fishman. “It’s just not the way I am.”
Posted by joe levin at 2:32 PM