Marty Markowitz, the Brooklyn borough president, in his office in Borough Hall. He is known as a highly visible power broker 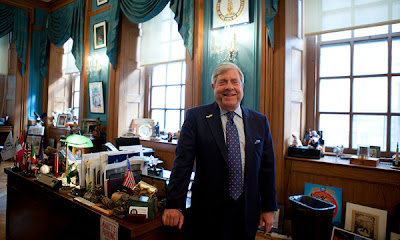 When one of the biggest real estate developments in Brooklyn was stalled two years ago, its owner turned to the city government for help, seeking $20 million in financing. Nearly 50 projects were applying for a small number of aid packages at the time, but this one, City Point, had a prominent supporter.

The future of Downtown Brooklyn depends on it,” Marty Markowitz, the Brooklyn borough president, declared.

City Point received the financing, and around the same time, the lead developer on the project, Acadia Realty, gave $50,000 to a charity run by Mr. Markowitz. The donation was one of a series that Acadia has made to Mr. Markowitz’s charities since 2005, totaling more than $300,000, city records and interviews show.

New York City has adopted some of the strictest rules in the nation to curb the influence of money in politics. Donors with business before it are all but barred from contributing to officials in the city’s campaign finance system.

Yet in recent years, Mr. Markowitz has found another way to tap into those donors. He has established a network of four charities that has reaped at least $20 million since 2003, and probably more, according to interviews and an analysis of city records.

That amount — remarkable for any local politician, let alone one who does not hold citywide office — is a testament to Mr. Markowitz’s stature as a Brooklyn power broker and to his intense focus on building these nonprofit groups. They have in turn played an important role in burnishing his public profile.

When the charities hold public events, Mr. Markowitz, who has been borough president since 2002, is typically in the spotlight. His free summer concerts, during which he is master of ceremonies, offer a chance to “Party With Marty,” as the slogan goes.

The donors to the nonprofit groups range from huge corporations like Wal-Mart and TD Bank to local entrepreneurs, but they usually have one thing in common: They have a stake in city legislation, real estate projects, zoning disputes and other Brooklyn issues.

Mr. Markowitz has often personally cajoled wealthy executives to give tens of thousands of dollars at a time to his nonprofit groups. Some recalled that he was relentless, seemingly unable to take no for an answer.

His nonprofit network is so intertwined with his office that anyone who wants to hold events in Brooklyn Borough Hall, a stately Greek Revival building on Joralemon Street, pays a fee to one of the charities, Best of Brooklyn, not to the city. Those fees in recent years have totaled nearly $200,000, records show.

Mr. Markowitz, 66, a Democrat, is considering running for mayor in 2013. He is known as a tireless Brooklyn booster who, with the help of two city-paid drivers, keeps a busy public schedule, including appearances on behalf of the charities.

As borough president, Mr. Markowitz has limited power. Many decisions on local issues are made by the mayor and the City Council. But Mr. Markowitz can make recommendations on zoning and on capital spending, and he appoints members to community boards.

More important, Mr. Markowitz has made himself a key player in Brooklyn by forming alliances and excelling at public relations. Businesses, if not seeking official approval from him, rely on him to cut through the city bureaucracy to help make projects happen or make problems disappear. With his outsize presence in the news media, real estate developers prefer to have him on their side.

Mr. Markowitz has recently run into ethics troubles over the boundaries between his personal interests and his official duties. He was fined $20,000 in July by the city’s Conflicts of Interest Board for accepting free foreign travel for his wife, Jamie. Earlier in the year, the board fined him $2,000 for using his chief of staff, Carlo A. Scissura, as his lawyer at a real estate closing.

But Mr. Markowitz’s role in fund-raising for his nonprofit groups has gone virtually unquestioned.

In an interview, Mr. Markowitz said his groups, especially the primary one, Best of Brooklyn, help make up for shortfalls in city financing. He said they were doing commendable work, including sending children to camp, running the borough’s restaurant week and promoting tourism. He brushed aside questions about whether donors might feel compelled to give because of his political influence.

I know the difference between right and wrong, and ethical and nonethical,” Mr. Markowitz said. “I am not pitching them to give me money, and me in turn give them anything.”

In interviews, several donors said they contributed to the Markowitz groups because they wanted to support a borough where they do business, not because of political pressure.

Members of Congress and high-level state officials around the country have increasingly created such affiliated charities, which allow businesses to show loyalty to politicians without the legal restrictions on campaign contributions. The politicians in turn gain favorable publicity from having their names linked to charitable activities.

Besides Mr. Markowitz, however, few other elected officials in New York City have established such charities to the same degree, according to city records. (Mayor Michael R. Bloomberg, a billionaire, has his own charity that does extensive work in the city, but it is largely self-financed.)

Two of Mr. Markowitz’s aides work both in the borough president’s office and at the charities.

But the charities are subject to little if any outside scrutiny, and do not disclose comprehensive information about their spending.

The New York Times located some information about the donors in paper records at the Conflicts of Interest Board. Under the law, officials who raise money on behalf of charities are required to disclose to the board some information about donors. The Brooklyn borough president’s office has done that, but some of its reports are incomplete.

In addition, the law allows the charities to specify only a range for each donation, not the exact amount. As a result, the total revenues for the four groups since 2003 could be anywhere from $20 million to $45 million.

Mr. Markowitz would not release a detailed list of the donors and the amounts they had given.

While Mr. Markowitz denied that there was any connection between donations and his role as borough president, he acknowledged that businesses often seek his backing.

Most major entities who are thinking of coming to Brooklyn, sometimes as a courtesy, they come in and meet with me,” he said. “They know I don’t hold their future in their hands, nor are they depending on me or expecting anything of me financially, but they come in because they want the good wishes or whatever.”

Among the largest donors to the charities are developers, who are often highly dependent on official action for their projects to proceed.

They include Acadia, the company building City Point, a 1.5-million-square-foot residential and commercial center in Downtown Brooklyn.

In 2009, Acadia sought and won city approval for $20 million in financing to help revive the commercial project. The application process was overseen by the city’s Economic Development Corporation, which is controlled by the mayor, but Mr. Markowitz weighed in on behalf of Acadia’s bid.

The development corporation said that of the 46 projects in the city applying for aid packages, it selected 11 to take part in the program. City Point eventually received one-sixth of all the financing in the program.

An Acadia executive, Jon Grisham, said in an interview that Acadia’s partner on City Point, PA Associates, had advised Acadia to send money to a Markowitz group, the Seaside concerts. Acadia began donating when it worked with PA Associates on earlier Brooklyn projects.

The conversations were between Marty and PA Associates,” Mr. Grisham said.

A principal of PA Associates, Aaron Malinsky, was indicted in March on charges of paying roughly $500,000 in bribes to State Senator Carl Kruger, a Brooklyn Democrat, who was also indicted. Mr. Markowitz had no involvement in that case.

Since then, Mr. Grisham said Acadia had severed ties with PA Associates and stopped donating to Mr. Markowitz’s charity.

Mr. Markowitz said there was no relationship between the Acadia donations and his lobbying for City Point.

“Why don’t you look at where the money was used, what the purpose of the funds were for?” Mr. Markowitz said. “How many people benefited? There was no quid pro quo here.”

Through his lawyer, Scott E. Mollen, Mr. Malinsky said he had advised making the donations because he wanted to help Brooklynites.

Mr. Markowitz was once an outspoken critic of Wal-Mart’s effort to open in the city, contending that the company treated its workers poorly and would harm local businesses.

In 2008, Mr. Markowitz recommended approval of the zoning resolution for a retailer in East New York, Brooklyn, preferably a supermarket, but only on the condition that Wal-Mart could not be the retailer unless it changed its employment practices. He even demanded that the developer promise in writing to prohibit Wal-Mart.

Soon after, Mr. Markowitz softened his criticism of Wal-Mart, saying its executives convinced him that the company had improved its labor practices. He added that shoppers were now going to Wal-Mart on Long Island. “It doesn’t make sense to me how we keep Wal-Mart out of Brooklyn,” he said

Both Wal-Mart and Mr. Markowitz said the donations were unrelated to Mr. Markowitz’s views on Wal-Mart’s expansion to Brooklyn.

Union leaders, who have long opposed Wal-Mart in New York and elsewhere, disagreed.

When somebody changes their mind after a corporation has come in and given a large donation, it is seen as an example of everything that people are disgusted with in politics,” said Patrick Purcell, the assistant to the president of the United Food and Commercial Workers Union Local 1500.

The charities have also reaped significant donations from local businesses. Cumberland Packing, which has received state-issued tax subsidies to keep producing Sweet’N Low at the Brooklyn Navy Yard, is a donor, as is the local franchisee for the Applebee’s restaurant chain, Zane Tankel.

He took my arm and twisted it off — yeah, he more than asked me, he kept coming at me, until finally I said yes,” said Mr. Tankel, adding that he was an admirer of Mr. Markowitz.

Mr. Tankel, his company and his family have given at least $135,000 to the charities.

Mr. Tankel has a restaurant in Bedford-Stuyvesant at a mall called Restoration Plaza, which has benefited from $2.5 million in city subsidies, including $900,000 at the direction of Mr. Markowitz’s office. But Mr. Tankel said he did not feel that the pressure from Mr. Markowitz was unseemly. “I have never gotten a favor from Marty,” Mr. Tankel said.

Forest City Ratner Companies, which is building the Atlantic Yards complex, has long relied on Mr. Markowitz’s backing for the huge project in the face of neighborhood opposition. Forest City is one of the biggest contributors to Mr. Markowitz’s charities, having given approximately $1.7 million.

“Sometimes, the borough president in his advocacy has blurred the lines between the role of private industry and government,” Councilwoman Letitia James of Brooklyn, an opponent of the project, said. “He is taking advantage of a loophole in the law.”

Mr. Markowitz, who has not yet decided whether to retire from politics or to run for mayor in 2013, called such criticism absurd.

I have everything that I could have,” he said during an interview. “I don’t need anything. I don’t need any of you! I have done this. I loved it. You could raise all the issues you want — the people in Brooklyn know me. You don’t understand that. They know me.”
Posted by joe levin at 6:05 AM