Rajat Gupta at his home on Wednesday morning in Westport, Conn 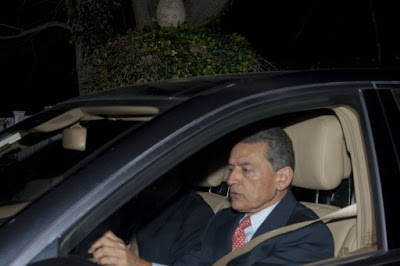 Rajat K. Gupta, a former Goldman Sachs director who surrendered to the Federal Bureau of Investigation on Wednesday morning, was charged with insider trading, the latest development in the government’s multiyear crackdown on illegal activity on Wall Street.

Mr. Gupta, 62, is accused of leaking corporate secrets on Goldman Sachs to the hedge fund manager Raj Rajaratnam, the Galleon Group co-founder who was sentenced to 11 years in prison this month for making tens of millions of dollars through insider trading. A federal grand jury in Manhattan charged Mr. Gupta with one count of conspiracy to commit securities fraud and five counts of securities fraud, all related to tips on Goldman Sachs in 2008.

“Rajat Gupta was entrusted by some of the premier institutions of American business to sit inside their boardrooms, among their executives and directors, and receive their confidential information so that he could give advice and counsel for the benefit of their shareholders,” Preet Bharara, the United States attorney in Manhattan, said in a statement. “As alleged, he broke that trust and instead became the illegal eyes and ears in the boardroom for his friend and business associate, Raj Rajaratnam, who reaped enormous profits from Mr. Gupta’s breach of duty.”

Mr. Gupta, wearing a navy blue suit and red tie, pleaded not guilty to all charges. He is set to be release on a $10 million bond, secured by his home in Westport, Conn. Mr. will also turn over his passport, with travel limited to the continental United States.

Gary P. Naftalis, a lawyer for Mr. Gupta, said in a statement: “The facts demonstrate that Mr. Gupta is an innocent man and that he acted with honesty and integrity.”

Authorities have broadly pursued insider trading on Wall Street, exacting guilty pleas from a chemist at the Food and Drug Administration, among others, as recently as this month. In the last two years, authorities have charged 56 people with insider trading, including Mr. Gupta; of those, 51 have pleaded guilty to or have been convicted of swapping illegal tips about company earnings and other major corporate events.

While the majority of those charged have been traders and analysts on Wall Street, Mr. Gupta is the first executive from the upper echelons of corporate America to be implicated. In charging Mr. Gupta, the government is tying up one of the biggest loose ends resulting from the investigation into the Galleon Group, which began nearly five years ago at the Securities and Exchange Commission.

The charges are a stunning reversal of fortunes for Mr. Gupta. A native of India, he graduated from Harvard Business School and had a global profile as an adviser to some of the nation’s most well-known companies. He served as a director at Goldman, Procter & Gamble and the AMR Corporation, the parent company of American Airlines. In addition to his professional pedigree, Mr. Gupta was a noted philanthropist, serving in coveted posts with the Bill and Melinda Gates Foundation.

Mr. Gupta’s case has been a tricky one for the government. Though his name came up repeatedly at Mr. Rajaratnam’s trial, both in testimony and in secretly recorded phone conversations, the Justice Department never filed charges against him. The S.E.C. filed an administrative action against Mr. Gupta, and he countersued. The agency later dropped the civil proceedings, but reserved the right to refile the case.

On Wednesday, the S.E.C. filed a civil complaint against Mr. Gupta and Mr. Rajaratnam, alleging an “extensive insider trading scheme.”

“Gupta was honored with the highest trust of leading public companies, and he betrayed that trust by disclosing their most sensitive and valuable secrets to the disadvantage of investors, shareholders, and fellow directors,” Robert S. Khuzami, director of the S.E.C.’s Division of Enforcement, said in a statement. “Directors who exploit board room confidences for private gain can be certain they will ultimately be held responsible for their illegal actions.”

While the strength of the government’s case is unclear, the details, many of which emerged during Mr. Rajaratnam’s trial, are explosive.

In the S.E.C. complaint, authorities claimed that Mr. Gupta gave Mr. Rajaratnam advance word of Warren E. Buffett’s $5 billion investment in Goldman during the darkest days of the financial crisis. After hanging up from a special board meeting in September 2008, prosecutors say that Mr. Gupta called Mr. Rajaratnam within 16 seconds. Moments later, just minutes before the stock market closed, Mr. Rajaratnam purchased shares in Goldman. When the hedge fund manager later sold the position, he netted about $840,000, according to the criminal complaint.

In one call that the jury heard during the trial of Mr. Rajaratnam, the hedge fund manager told someone: “I heard yesterday from somebody who’s on the board of Goldman Sachs that they are going to lose $2 per share.” In a different call, Mr. Rajaratnam said, “I got a call saying something good is going to happen to Goldman.”

A judge could say the evidence was hearsay, which means it is too speculative to use in court against Mr. Gupta.

Mr. Gupta’s path to the heights of the global business elite began in India shortly after the country’s independence from Britain. He attended the prestigious Indian Institute of Technology before enrolling at Harvard Business School. After graduating near the top of his class, he joined McKinsey & Company and quickly rose up the ranks of the white-shoe consultancy, which advises a large swathe of the Fortune 500 companies on corporate strategy, executive training and other business matters.

In 1994, at the age 45, Mr. Gupta was tapped to lead McKinsey. During his tenure, the firm expanded its global reach, aggressively moving into emerging markets like India and China.

While he oversaw an era of growth at the consulting firm, his reign was not without controversy. McKinsey encouraged Enron‘s transformation from a sleepy energy pipeline company into a high-risk trading operation that ultimately collapsed amid an accounting scandal. Jeffrey K. Skilling, Enron’s former chief executive, was a McKinsey alumnus.

The complaint details ties between Mr. Gupta and Mr. Rajaratnam that predate the alleged Goldman tips. From 2003 to 2005, Mr. Gupta had money in at least two of Mr. Rajaratnam’s hedge funds, an investment valued at about $2.5 million by March of 2005, according to the complaint.

The two men also started several financial ventures together, including an investment fund with $10 million from Mr. Gupta and $40 million from Mr. Rajaratnam. That vehicle, Voyager Capital Partners, invested some of its money in hedge funds at Galleon, including some managed by Mr. Rajaratnam.The pair also founded a private equity firm to invest in Asia. Mr. Gupta served as its chairman through 2010, the complaint states.

“There were legitimate reasons for any communications between Mr. Gupta and Mr. Rajaratnam – not the least of which was Mr. Gupta’s attempt to obtain information regarding his $10 million investment in the GB Voyager fund managed by Mr. Rajaratnam,” Mr. Naftalis, Mr. Gupta’s lawyer, said in a statement. “In fact, Mr. Gupta lost his entire investment in the fund at the time of the events in question, negating any motive to deviate from a lifetime of probity and distinguished service.”
Posted by joe levin at 7:51 PM