Flyers stranded aboard Jet Blue plane for 7 hours after flight diverted to Conn. 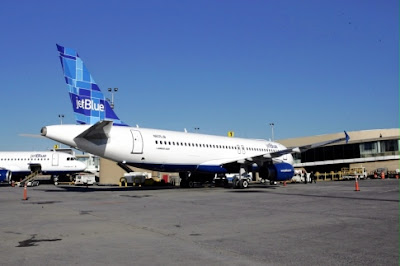 Some 200 passengers aboard a Newark-bound Jet Blue flight were trapped on the plane for seven hours without food, water or working bathrooms after the freak snowstorm that socked the East Coast on Saturday forced the plane to land in Connecticut.

Passengers said they were told they'd be let off the plane shortly after it reached Bradley International Airport at around 1:30 p.m.

But hours later, Flight 504 from Fort Lauderdale was still sitting on the tarmac.

"We ran out of water," passenger Andrew Carter, a reporter planning to cover the Giants-Dolphins game, told The Hartford Courant from the plane.

"The bathrooms are all clogged up and disgusting. The power would go off every 45 minutes or so for five minutes or so, and that would freak people out.''

Flyer Todd Bailey told FOX Connecticut that a crying baby - and fried nerves - led to a spat among two passengers, while others were screaming at flight attendants to let them free.

"It's just crazy… Everybody is freaking out here. They're tired of it," he told FOX.

At one point, firefighters and cops came aboard to help a paraplegic man who was having circulation trouble, The Courant said.

More firefighters finally arrived at around 9 p.m. and began taking people off the plane with a ladder, according to local reports.

Jet Blue apologized for the incident in a statement on Saturday.

The rare October snowstorm forced 23 planes to land at Bradley on Saturday, causing a massive traffic jam, according to Gov. Dannel Malloy's office.

The pre-Halloween nightmare left some passengers in a foul mood.

"Next time I spend 11.5 hours on a plane, I sure as heck better wind up someplace better than Hartford, Conn.," Carter wrote on Twitter.
Posted by joe levin at 2:42 PM