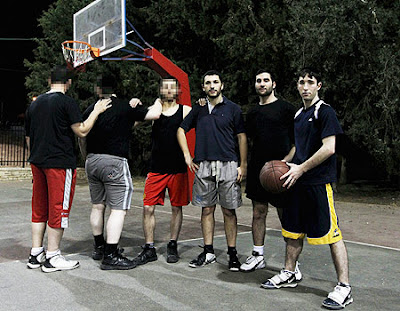 They play in black uniforms, hide their 'peyes' behind their ears. They don't have a budget or a seal of approval from rabbis – but they are well-equipped when it comes to faith. Meet Jerusalem's new smash hit: the Maccabi Mea Shearim basketball team.

This week, the team, whose members all live in or around the famous Jerusalem ultra-Orthodox neighborhood - faced a team of Zionist religious bachelors from the neighborhood of Rehavia, Yedioth Aharonoth reported.

One by one they come on court: Yitzhak Pinksi, 19, guard, a student in the well-known haredi yeshiva Mir, who came to Israel from Milwaukee. "I wake up very early to run, and one night a week I allow myself to leave the yeshiva early so I can play basketball," he says.

He is followed by Natan Frenkel, 22, married with two children who is known for playing in a wedding band.

The grandson of Shas' spiritual leader Rabbi Ovadia Yosef, Yonatan Yosef, aged 31, is next, followed by Ari Gelhar, 24, a haredi working in the filed of communication.

The other two players did not wish to expose themselves: "It is not really accustomed in the haredi world. Some would look at us differently if we would come out with this hobby." It appears a basketball player does not rank high for a shidduch.

"We have decided to prove once and for all that haredi also know how to play basketball," says Gelhar.

And it appears he is right as the Mea Shearim team defeats the Rehavia team 24-17"How are they in such good shape?" wonders Roi from the opposing team. "Aren't they supposed to be studying torah all day?"

The haredi team points to Yonatan's relation to Rabbi Ovadia Yosef. "Maybe the good luck came from there."

Maccabi Mea Shearim is now seeking to join the city-sponsored synagogues league and take their hobby to the next level.
Posted by joe levin at 6:00 PM