Segregation of the sexes spreads among Orthodox Jews

Ultra-Orthodox couple walks together down the street. 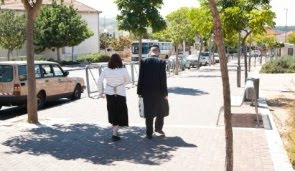 Buses, public sidewalks and streets split between men and women.

When a recent online exposé revealed that women on a city-franchised bus were required to sit in the back, those who seemed to be least outraged were the women who actually ride the bus and live in the two heavily Orthodox Brooklyn neighborhoods it connects.

“It never bothered me,” said Rachel Freier, a lawyer from Boro Park who rides another segregated bus to Manhattan from her summer home in the Orthodox enclave of Kiryas Joel. “It is not that I feel I am being segregated. As a woman, it is my own sphere of privacy.”

“What is special about this isn’t the segregation of sexes, but the segregation in the public domain,” said Samuel Heilman, a sociologist at Queens College who has written extensively on the ultra-Orthodox. “That didn’t happen before. They separated men and women, but they would have never thought to do it on turf that isn’t completely theirs. They are saying, ‘We own the street, we own the bus, we own the public square.’”

According to Gershom Gorenberg, author of the upcoming book “The Unmaking of Israel,” pressure for sex segregation in public spaces is part of a ramped-up religious vigilance in the Haredi world, caused in part by a lack of passed-down direct knowledge of how traditional Jews in earlier generations actually lived day to day.

Many such religious and cultural practices were obliterated during the Holocaust, he said, and in their absence, Haredi communities in Israel and beyond have adopted a “stricter is better” approach to Jewish, or halachic, law.
Posted by joe levin at 8:20 AM