Petition to keep John Galliano from teaching at Parsons 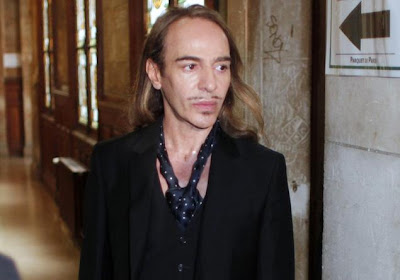 A petition launched on Change.org aims to keep the ex-Dior designer from teaching a masters class at Parsons The New School for Design in New York City.

“Imagine if the school were hiring a person who publicly voiced support for the KKK — there would likely be backlash because it's not right to have someone like that teaching at a school,” the petition reads.

“But because this is someone who has made anti-Semitic remarks, people are willing to look the other way. This is unacceptable.”

Galliano’s reputation was ruined after the 52-year-old designer drunkenly lashed out at a table of diners he thought were Jewish, spewing anti-Semitic insults and telling the crowd, “I love Hitler.”
He was arrested, dropped as the head designer of Dior, and entered rehab for alcoholism.

But supporters of the petition, launched anonymously on Wednesday, say that’s not enough.
“As president of the Jewish Student Union, the oldest and largest club on campus, I am shocked that The New School hired John Galliano,” student Jennifer Kaplan wrote on the website.

Another supporter chided the school for sending the message that Galliano’s “anti-Semitic remarks can be swept under the rug.”

“He can’t be in a position of influencing young minds,” Kimberly Kirchstein wrote.

“Particularly in this industry, worldy-ness [sic], broadmindedness, respect for all, and tolerance are key.”More than 250 people have signed the petition.