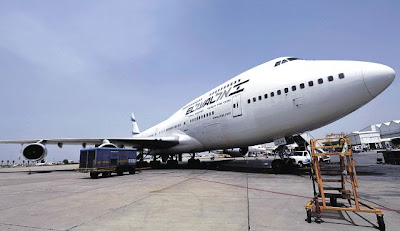 Barring a last minute change, workers at Israel's three main airline carriers are set to launch an open-ended strike Sunday, in protest of the government's plans to ratify an open skies deal with the European Union they see as a threat to their jobs.


Major disruptions are expected to take place in flights from and to Israel starting 5 am Sunday.

Meanwhile, Channel 10 exposed that the Transportation Ministry had in the past warned of El Al's collapse in the case of an open skies deal but did not bring a report it penned on the issue to the government's attention. The Ministry denies it concealed the report from the public.

The agreement will allow all EU airlines to operate direct flights from Europe to Israel, and all Israeli airlines to fly to EU destinations. The respective workers unions for El Al, Arkia and Israir are claiming this will destroy Israeli airlines and and will lead to major redundancies.

Meanwhile, the three major airline carriers moved up a proportion of their Sunday flights to 4 am, in order to dodge the strike.


As things stand, the parties involved are at loggerheads with no apparent resolution in sight. Transportation Minister Yisrael Katz announced over the weekend he does not intend to succumb to threats of a strike, and the proposal shall be submitted to the government for approval. The unions, meanwhile, went ahead and declared the strike.


Katz met on Friday with Finance Minister Yair Lapid to discuss the implications of the agreement. There is still a chance that Prime Minister Benjamin Netanyahu would intervene by removing the controversial deal from the agenda of the Sunday cabinet meeting. However, thus far Netanyahu refused to become involved in the conflict.

The Transportation and Finance ministries said that the agreement is expected to significantly boost tourism to Israel and to lower the cost of flights from Israel to Europe. However, it is also likely to take a toll on the revenues of Israel's three major airlines.

To prevent crippling damage to the domestic companies, the government ruled that the agreement be implemented gradually over the course of five years, in order to give the carriers time to adjust to new competition from foreign companies. The government is also expected to increase state participation in the carriers' security bills at a rate of NIS 5 million a year.

However, the promised benefits did little to allay fears among airline unions, who are determined to go ahead with the strike.

Katz, a member of Netanyahu's right-wing Likud party, told Israel Radio a free skies agreement "would significantly lower the prices of airline tickets to Israel, do well by Israeli citizens, and attract many tourists" to the country.

"Such deals contain risks as well as benefits and the companies ought to exploit the opportunity" to compete more vigorously with European airlines which could also open the door to Israeli airlines landing in hundreds more cities, Katz said.


Meanwhile, Channel 10 on Saturday made public a secret document circulated inside the Transport Ministry, warning of the imminent collapse of El Al in the event the open skies deal with EU is set in motion. The document, labeled "Sensitive; internal use only," says El Al would not be able to handle international competition and will face insolvency.

Some of the options for staving off the collapse of the domestic giant include emergency state funding and temporary nationalization of the company, with a view to finding it a powerful private investor.


The document was not intended to be presented before the cabinet; according to Channel 10.Instead the ministers were presented with far rosier prognoses regarding the Israeli companies' ability to deal with international competition.

"Since, according to the Ministry of Transport, the downfall of Israeli transportation companies is on the cards, I do not see what the government hurry toward," said Ofer Eini, Chair of the Histadrut Labor Federation. "I urge the prime minister and the finance minister to take responsibility and postpone the hearing, so as to divert descent into chaos and stave off massive lay-offs."

The Transportation Ministry issued a statement denying it had concealed the report from the public and stated that the possibility of insolvency noted in the document had nothing to do with the open skies agreement.

Calcalist correspondent Micky Peled said there are three matters of contention the Israeli flight companies find untenable about the open skies deal. Firstly, there is the issue of lack of compensation for the airlines' security outlays, which are significantly higher than those of foreign companies.

Secondly, the agreement does not allocate them additional landing slots in overcrowded European airports, while supplying their foreign competitors with landing slots aplenty on Israeli soil. Finally, it does not leave them the option to withdraw from the deal, should they find it financially unfeasible.
Posted by joe levin at 8:49 PM