One suspect in Boston Marathon terror attack DEAD, but another remains at large following night of chaos, explosions in Boston area 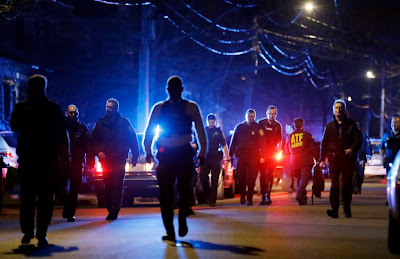 One suspect in the Boston Marathon terror attack is dead, but another remains at large following violent incidents overnight that took the life of a police officer and shook the outskirts of the city.


Authorities confirmed early Friday that the incidents in Cambridge and Watertown, Mass., were directly connected to the Boston Marathon attack Monday.

And the Massachusetts State Police sent out an alert shortly before 4 a.m. Friday announcing that a press conference would be held at a Target store in Watertown.

The chaos in the city still shaken and grieving after the fatal marathon bombing on Monday started about 10:30 p.m. Thursday when a campus police officer was killed at the Massachusetts Institute of Technology in Cambridge, not far from the scene of the twin bombings that killed three and wounded scores of others, authorities said Friday.


A short time after the fatal MIT shooting, gunfire and explosions were reported during a manhunt in nearby Watertown, in connection with an apparent carjacking.

Federal authorities were seen with firearms at the Watertown scene early Friday, along with dozens of police and National Guard members.

Watertown is where first one and then another man were taken into custody following long gunfire exchanges, according to reports.

Television video footage showed one man, stripped naked, being led into a law enforcement car. And a photograph showed a man on his stomach on the ground with officers surrounding him.

Authorities were heard calling for someone to get on the ground and put their hands up, and a loud thud sounded after someone shouted “fire in the hole.”

A witness in Watertown told NBC that he saw men light a pressure cooker bomb like those used in the marathon attack and throw it toward law enforcement officers.

An MIT professor who witnessed the Watertown scene told The News he smelled sulfur and heard explosions go off in the area where officers had a shootout with suspects.

“The cops pushed us back. They said they were setting them off.”

In Cambridge earlier, the MIT cop was responding to a report of a disturbance and was shot multiple times outside a university building, authorities said.

There were no other victims at MIT and the officer was not immediately identified. The campus was put on lockdown.

“I heard the shots,” student Alejandro Perez told The News.

“This thing just happens on Monday, so we’re all worried,” Perez added, referring to the Boston bombing.

The FBI released still photos and video Thursday of the two prime suspects in the Boston Marathon bombing, urging the American public to help arrest the savage killers wanted for the terrorist attack.

Late Thursday, another photo — the only still shot marathoner David Green snapped with his iPhone — went viral because it seemed to depict one suspect slinking away from the finish line area just after the attack.

Investigators identified their suspects with help from a brave attack victim who appeared in a striking news photograph taken moments after losing both legs, it was also revealed Thursday.

The duo — identified only as Suspect 1 and Suspect 2 — strolled one behind the other along a crowded Boylston St. sidewalk Monday.

Clearer than the photos released by the FBI earlier Thursday, Green’s photo shows details such as the number three emblazoned on the man’s white hat.