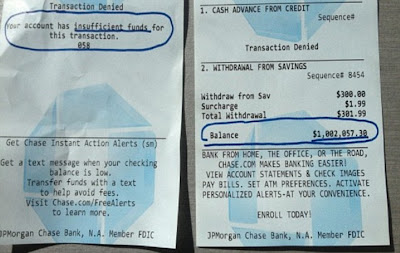 With a population of more than 8million people there are clearly going to be inequalities in New York's living standards.


However, as illustrated by these two receipts found outside a bank in the Big Apple, the differences in quality of life for New Yorkers are more stark than any other city in the U.S.

The receipts were found outside a branch of Chase bank by Tony Case, executive editor at AdWeek.


One says the customer has 'insufficient funds' to withdraw $100. The other, is a $300 withdrawl on an account with a balance of more than $1million.

The receipts back-up a recent report on Income inequality in New York.


The analysis from major Michael Bloomberg's administration revealed that nearly half of the city's residents were poor or near-poor in 2011.

However, during the same year it was revealed that New York is the American city with the most millionaires.


A recent Census Bureau report also found that New York City and New York State are the metropolitan area and state respectively with the highest level of income inequality in America.

This is not the first time a receipt has highlighted differences in wealth in New York.

In 2011, a receipt was left outside an ATM in super-rich East Hampton which revealed the bank account contained nearly $100 million.
Posted by joe levin at 8:25 AM