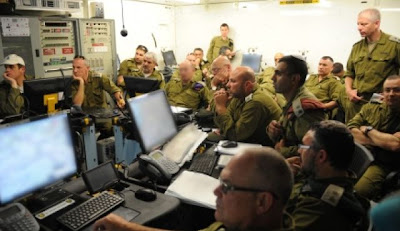 The Israel Defense Forces neglected to give Defense Minister Moshe Ya'alon advanced notice of its intention to hold a large battle drill on the Lebanese front that began Monday, handing a blow to the upper ranks of Israel's defense establishment.


Some 2,000 Israel Defense Forces reservists were called up for the simulation, which was coordinated as part of the army's yearly drill plan. The timing of the drill is especially sensitive, however, due to the civil war in Syria and the recent tensions surrounding the possibility of an attack by Israel or the U.S. against chemical weapons sites in Syria.

Officials in the Knesset's Foreign Affairs and Defense Committee also complained that they were not informed of the drill ahead of time, particularly considering the fact that it is being held at such a sensitive time.

This is the second incident within the last week that the IDF leadership has embarrassed Israel's political echelon.

Last Tuesday, Brig. Gen. Itai Brun, the head of the Research Division at Military Intelligence, said at a conference that Syrian President Bashar Assad's regime was using chemical weapons in that embattled country. The intelligence that Brun was referring to was credible, but his remark stirred tensions with the U.S., which feared that Israel was pushing it toward action in Syria.

The content of Brun's statement was known to his commanders but was not coordinated with the political echelon. Over the past weeks, Israeli officials have been exerting great efforts to tone down the tensions between Jerusalem and Washington on the matter. Israeli political sources said that the IDF should give more thought to the consequences of its public actions.
Posted by joe levin at 2:34 PM