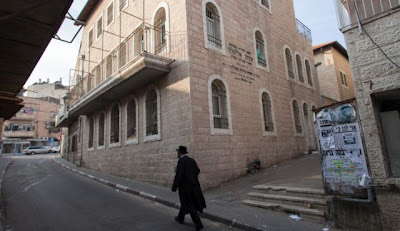 Tax Authority inspectors paid a surprise visit to Jerusalem's ultra-Orthodox Mea She'arim quarter last week in order to hunt down tax violations. The move came partially in response to criticism that the authorities turn a blind eye to tax evasion in Haredi neighborhoods even though it is ostensibly rife there.


The inspectors audited businesses in Mea She'arim's main commercial center, in the area of Geula, Malkhei Yisrael and Tsfania streets.

Inspectors carried out 137 audits in Jerusalem, Ramle and Lod last weekend in an attempt to build deterrence. Some 17.5% of the businesses were found to be not recording revenues. The figure was 14% for Jerusalem, and 24% in Ramle.

A visit to a Mea She'arim butcher revealed NIS 3,000 in off-the-book transactions, for instance. The butcher said that was his rent payment. When pressed to show the rental contract, he said he didn't have one, adding, "What's the problem? We'll draft one now."

At another establishment, a well-known Jerusalem coffee shop, the cash register was not actually recording transactions, and the business had no record of sales for the past two weeks. At another location, a cosmetician, a transaction initiated by the auditors was not recorded in the books.

Income tax inspectors also raided Lod's commercial center over the weekend. Records at one furniture store indicated off-the-book transactions totaling NIS 2,000. Here, too, the store owner alleged that this was his rent payment.

And when the inspectors ate at a well-known restaurant in neighboring Ramle, they observed transactions totaling NIS 900 that were not recorded. Here the owner said that the restaurant aggregates transactions before recording them.
Posted by joe levin at 8:57 PM