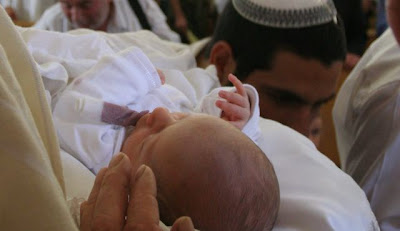 Israel's chief rabbinate has weighed in on the practice of a controversial circumcision rite in Germany, saying that metzitzah b'peh is preferred.


The practice, in which blood is sucked orally from the circumcision wound, is under scrutiny in Germany, due to a complaint filed against a Berlin rabbi for allegedly committing bodily harm during a brit milah.

Rabbi Moshe Morsiano, chair of the Division of Circumcision for the Chief Rabbinate of Israel, emphasized in a letter dated April 22 that there is no justification for avoiding metzitzah b'peh "unless the mohel has a sore in his mouth, or some infectious disease."

The letter was addressed to Rabbi Yehudah Teichtal, who heads Chabad Lubavitch in Berlin and is one of several official rabbis in the city. Teichtal requested the response after an anti-circumcision activist filed charges against him, claiming oral suction was performed at the brit milah of Teichtal's son. Berlin's state prosecutor is looking into the merits of the case.

Germany's new law regulating ritual circumcision, passed in December, requires that the procedure be done to the highest possible medical standards. Metzitzah b'peh has come under fire by many Jewish groups, including modern Orthodox associations, due to the possible spread of infections that can be fatal to an infant. Opponents recommend the use of a pipette.

In New York, at least 11 boys contracted herpes from the practice between 2004 and 2011, according to New York City health officials. Two died from the disease and two others suffered brain damage. Last September, the board of health voted 9-0 to require mohels to obtain signed consent forms from parents.

In his letter responding to Teichtal's query, Morsiano concluded that "this committee requires that the mohel obtain the family’s permission before performing this act in the traditional manner."

The Israeli chief rabbinate was the latest of several international Orthodox rabbinical organizations to weigh in on the matter. Its support of the tradition reflects that of the Brussels-based Rabbinical Council of Europe.


On the other hand, the London-based Conference of European Rabbis issued a statement saying that the use of pipettes is approved under Jewish law and preferable, for health reasons. The Central Council of Jews in Germany followed suit.

Meanwhile, Teichtal has not commented on whether the tradition was followed at his son's brit milah.
Posted by joe levin at 8:53 AM