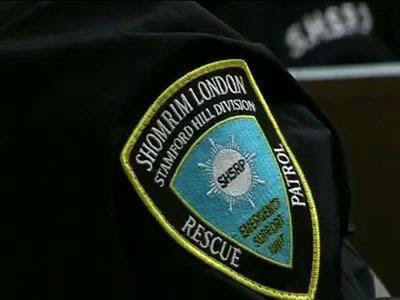 
The victim is a volunteer with a local Orthodox Jewish patrol group, Shomrim. The man suffered a skull fracture after an incident in the Golders Green neighborhood in the early hours of the morning.

The father of three had responded alongside his colleagues after a number of Orthodox Jews reported being hit by eggs thrown from a car. The security group members followed the vehicle and surrounded it until police arrived.

It is understood that the volunteer, who is in his 40s, lost consciousness and suffered serious injuries after falling from the hood of the car when the vehicle sped away from the scene.

Some police sources claim that the volunteer, who is recovering in the hospital and had climbed onto the car was "stupid".

"We believe that the actions taken by the police seriously endangered the safety of our members," the president of the Shomrim Patrol said.

Barnet police commander Chief Superintendent Adrian Usher said the incident is still under investigation and he rejected claims that his officers were to blame.

“Shomrim Patrol members should not be active on crime scenes where police are already present. Their work is appreciated as long as they do not interfere with police.

Police are trained to fight crime while the Shomrim Patrol members are not as well trained as police.

This should be their learning lesson,” Kieth Jones, 42, of London, England told the News. after learning about the incident.

An 18-year-old from Finchley was arrested Thursday afternoon and questioned on suspicion of attempted murder, related to the incident. He has since been released on bail.
Posted by joe levin at 12:03 PM