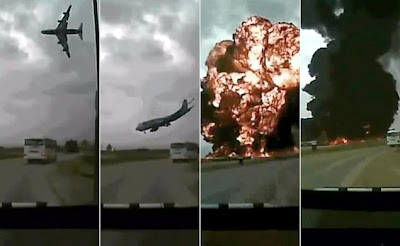 KABUL, Afghanistan — A civilian cargo plane owned by an American company crashed at Bagram Air Field, north of the Afghan capital, soon after takeoff on Monday, killing all seven people aboard, the US-led military coalition said.


The Taliban quickly claimed responsibility for downing the Boeing 747-400, but NATO said in a statement to The Associated Press that the Taliban "claims are false." The coalition says the cause of the crash was being investigated by emergency crews that rushed to the site, but there was no sign of insurgent activity in the area at the time.

The plane — owned by National Airlines, an Orlando, Florida-based subsidiary of National Air Cargo — was carrying vehicles and other cargo, according to National Air Cargo Vice President Shirley Kaufman. She said those killed were four pilots, two mechanics and a load master, who was responsible for making sure that the weight and balance of the cargo is appropriate.
Five of the seven fatalities were from Michigan, said Kaufman.


"We are not yet releasing the identities of the colleagues we lost out of respect for their families who need a little more time to reach other loved ones," she said in an email to the AP.

The US National Transportation Safety Board and the Afghanistan Civil Aviation Authority are investigating the crash, she said.

National Airlines was based until recently at Michigan's Willow Run Airport, west of Detroit in Wayne County's Van Buren Township. It carries cargo both commercially and for the military, Kaufman said. She said it employs about 225 people.

In another development, Afghan President Hamid Karzai accused US forces of killing four civilians and wounding one in the eastern province of Nangarhar on Sunday after an American convoy was attacked by insurgents.

In a statement issued by his office, Karzai "strongly condemned the killing of innocent civilians."

The US-led military coalition said it was still investigating the weekend clash, which left four soldiers with minor injuries and damaged a patrol vehicle. In a statement issued on Monday, the coalition said the Taliban attacked the coalition patrol with small arms fire and roadside bombs as it moved through a local bazaar in the province where there were civilians.

"Coalition forces engaged the enemy, pushed through the hostile area, and traveled to a nearby Afghan National Army checkpoint," the coalition said in a statement. "An investigation is currently underway to assess whether there are any civilian casualties as a result of insurgent fire."
Posted by joe levin at 3:08 PM