Chile: Search on for missing Israeli 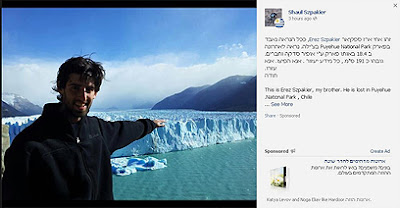 Erez Szpakier, 24, of Tel Aviv has been missing for three days in Chile. The Israeli traveler was last seen in Puyehue National Park, located on the Argentina-Venezuela border.
Szpakier had planned to tour the park with friends, but then decided to spend a little more time in the park on his own. He was not heard from since.

Puyehue National Park is located in the Chilean Andes and includes four volcanoes estimated to be active. Two years ago, the park’s namesake volcano erupted, which prompted the closing of the trails, but a few months later, they were re-opened, though volcanic activity continued.

The father of one of Erez's friends contacted his family and the local Israeli consul is scheduled to arrive at the park Thursday.

“He has been traveling in the area since March,” said his brother Shaul. “We last spoke on April 16 and he said everything was fine; he was having a good time. After we received this message, we realized that something was wrong."

According to Shaul, his brother was supposed to return from the park two-and-a-half days ago. “I know Erez well. Initially, I was less stressed because I thought he might just be taking his time, but now we are worried. It's stressful. My father is flying there today.”

Shaul added that helicopters were scouring the area for his brother.

The Foreign Ministry confirmed that an Israeli has been reported missing in the past three days, and that the consulate is providing assistance in the search efforts.