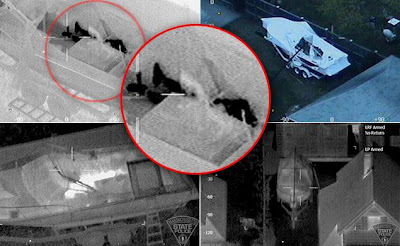 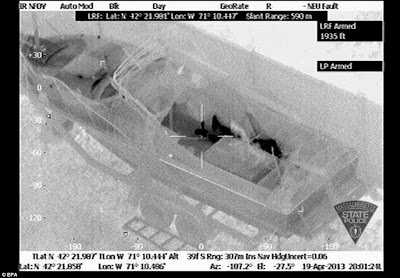 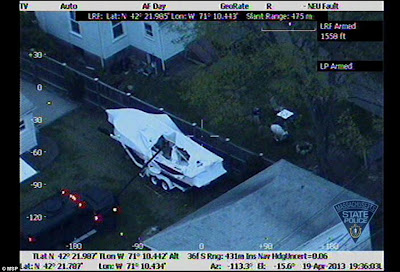 
The pictures reveal how state-of-the-art thermal imaging cameras helped police track the Chechen terror suspect while he hid on David Henneberry's boat for his final stand off in Watertown following a terrifying week of violence.

Henneberry called 911 after spotting blood and what he thought was a crumpled body in his boat, which was sitting in the backyard of his home.

Authorities then used a helicopter equipped with a thermal imaging device to confirm that there was a body in the tarp covered boat and that the person was alive.


Hovering over the area, the helicopter spotted the heat signature of a person, confirming Henneberry's suspicions.


'Our helicopter had actually detected the subject in the boat,' Col. Timothy Alben of the Massachusetts State Police told NBC News. 'We have what's called a FLIR — a forward-looking infrared device — on that helicopter.


The chopper monitored the body in the boat for more than an hour before police moved in and took the bleeding Dzhokhar Tsarnaev into custody.

He remained in hospital today and was described as clinging to life as Gov. Deval Patrick said: 'I hope he survives, because we have a million questions.'

The secret service's top interrogators are now waiting to quiz him as he is treated in the same hospital where 11 victims are still recovering.


Thermal imagers are able to detect a body or other heat source inside a house, a vehicle, or in this case, a boat, because heat, unlike visible-light wavelengths can pass through walls.

Police regularly use them to find out whether marijuana is being grown inside a house with heat lamps.

A nightmarish 24 hours came to an end in Boston at around 8:45pm yesterday as the 19-year-old suspect was taken into custody alive but injured after a gun battle with police and federal agents.

It signaled the end of five days of terror set-off by the double bombing at the marathon finish line.

The mayor of Boston, Thomas Menino, was quoted by the Boston Globe as taking to the police scanner to exclaim, 'We got him'.

'I have never loved this city and its people more than I do today. Nothing can defeat the heart of this city .. nothing.'

Relieved law enforcement officers began cheering and clapping after he was arrested and thousands of jubilant members of the public took to the streets to salute their hard work.

Henneberry became the day's unusual hero when he decided to check on his beloved boat moments after police lifted a Boston-wide lock-down believing they wouldn't find the younger suspect.


'He looked and noticed something was off about his boat, so he got his ladder, and he put his ladder up on the side of the boat and climbed up, and then he saw blood on it, and he thought he saw what was a body laying in the boat,' Henneberry's neighbor, George Pizzuto told ABC News.

'So he got out of the boat fast and called police.'

'That boat's his baby. He takes care of it like you wouldn't believe. And they told him it's all shot up,' Pizzuto said. He's going to be heartbroken.'


Within minutes police, ATF, SWAT and K-9 units had descended upon 67 Franklin Street and engaged Tsarnaev in a vicious gun battle - over 40 shots rang out in the quiet suburban neighborhood.

'There was an exchange of gunfire,' confirmed Boston Police Commissioner Ed Davis at a news conference.

Authorities, using a bullhorn, had called on the suspect to surrender: 'Come out with your hands up.'


'We used a robot to pull the tarp off the boat,' David Procopio of the Massachusetts State Police said to CNN. 'We were also watching him with a thermal imaging camera in our helicopter. He was weakened by blood loss -- injured last night most likely.'