The new Orthodox face of Women of the Wall 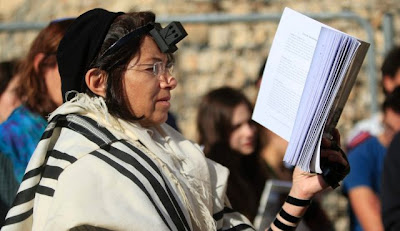 Earlier this month, while several hundred women held their monthly Rosh Chodesh prayer service at the Kotel, a group of ultra-Orthodox men jeered loudly at them from across the barrier separating men and women.


“Reform Jews, get out of here,” they shouted. “Reform Jews do not belong to the people of Israel. Reform Jews, you are unclean.”

As far as many ultra-Orthodox Jews are concerned, and even many secular Israelis, Women of the Wall – the organization behind the highly publicized battle of recent months to wrest control of Judaism’s holiest site from the Orthodox establishment – are indeed just that: a group of Reform Jews. After all, Reform Judaism was imported to Israel from English-speaking countries and many of these women are English-speakers. And Reform Judaism allows women to put on tallitot and tefillin when they pray, which is precisely what these women do.

Many Israelis would probably be surprised to learn that two of the eight board members at Women of the Wall are, in fact, Orthodox women, one of whom assumed her position just a week ago. Negotiations are now under way to bring another two on board.

Aliza Berger-Cohen, an Orthodox woman who has sat on the board for the past 10 years, finds it amusing that Israelis still can’t figure her out. “I have a colleague at work who has known for years that I’m Orthodox, but last week, when I got back from the Women of the Wall service, she says to me, ‘But you’re Reform – right?’”


It may also come as a surprise that a growing number of Orthodox women, particularly Orthodox feminists, have begun to rally behind Women of the Wall after many years of sitting on the fence, as evident in their relatively large presence at the most recent service.

“There is a strong contingency of Orthodox women who now feel it’s their duty to be in attendance with us,” says newly installed board member Leora Bechor, an Orthodox lawyer who grew up on Long Island.

Among the Orthodox participants at the Rosh Chodesh service held earlier this month, where five women were detained by police for wearing tallitot, Bechor says she recognized students from Yeshivat Talpiot, an egalitarian yeshiva in Jerusalem; members of Shira Chadasha, an Orthodox feminist congregation in Jerusalem; activists in the campaign for women’s rights in Beit Shemesh; faculty from the Pardes Institute of Jewish Studies; and representatives of Kolech, the Israeli Orthodox feminist organization.

Although Women of the Wall is widely associated with the Reform movement, it is very much based on an Orthodox model, says Elana Sztokman, the executive director of the Jewish Orthodox Feminist Alliance, an international organization based in New York.

“At its core, it is a woman’s prayer group,” she says. “Women’s prayer groups are an Orthodox invention. They’ve been around since the 1970s in the United States, and you find them in almost every major Orthodox community there. This is why JOFA has always been in favor of Women of the Wall.”

Berger-Cohen was active in such a prayer group in Brooklyn before she moved to Israel in 1995. “The minute I made aliyah,” she says, “I ran to Women of the Wall, because it was really important for me to join a women’s prayer group in Israel.”


Only asking for 11 hours

Several weeks ago, Jewish Agency Chairman Natan Sharansky announced his plan for resolving the ongoing dispute over prayer at the wall, based largely on the establishment of a third section of prayer for egalitarian services. The plan has been hailed widely as a victory for Women of the Wall and its struggle to allow Jews to pray as they wish at the wall.

Ironically, though, the Sharansky compromise does not make any accommodations for those women’s prayer groups that were the inspiration for Women of the Wall, notes Sztokman. “I’m fully supportive of egalitarian prayer,” she says, “but we need to make sure the needs of Orthodox women are also taken into account. That’s really important – that our needs not be forgotten.”

Hoffman, the Women of the Wall chairwoman, was quick to welcome Sharansky’s compromise plan. A bit too quick, however, for some of her Orthodox cohorts on the board, who can’t quite figure out what’s in it for them.


Orthodox women like herself, she explains, want to pray with other women, not with men, so allocating a space for egalitarian prayer does nothing to solve their current problems at the wall. “If we move over to the egalitarian section, we’d have to put a mechitza [separation barrier] around ourselves, and then that might offend other people there,” she says.


Neither is Bechor thrilled with the Sharansky plan, which she says does not address a major issue for Orthodox women. “For me, it’s not a solution,” she says. “As Orthodox women, all we are asking for is to give us on our space where we can feel comfortable 11 hours of the years – 11 and not 12 because we don’t hold our service on Rosh Hashanah.”

A matter of gender discrimination

Israeli Orthodox women have long viewed the struggle of Women of the Wall with ambivalence, notes Rachel Keren, a senior lecturer at Midreshet Ein Hanatziv, a post-high-school institute of Jewish studies for women. One reason, she explains, is that praying as men do with tallitot and tefillin -- a practice very much identified with Women of the Wall -- has never been a top priority for them.

“This is a practice that came very much from the world of Conservative and Reform Judaism,” says Keren. “It is not very accepted in the Orthodox world, even though there are no specific prohibitions against it.”

Still, Keren, a leading voice in the Orthodox feminist world, says she whole-heartedly supports Women of the Wall and their cause. “As a matter of principle, nobody has the right to judge anyone else about how they conduct themselves before God.”

In the past, the controversy over prayer at the Western Wall was largely perceived by Orthodox women as a battle between different streams of Judaism, specifically non-Orthodox against Orthodox, which may explain their initial reluctance to take a stand. Lately, however, in the aftermath of the police crackdown on Women of the Wall, the controversy has become increasingly identified with gender discrimination, making them feel more comfortable about getting involved.


“Because it is now perceived more as a struggle of women against men – in this case against ultra-Orthodox men and the police – it has become easier for Orthodox women to join the cause,” notes Dr. Hannah Kehat, the founder and executive director of Kolech.

Bechor, the latest Orthodox recruit to Women of the Wall’s board, became active in the organization only about half a year ago. “If I wanted to daven, I wasn’t going to go to the Kotel because I never felt comfortable there,” she says. “It kind of felt like being in an ultra-Orthodox shul. But once the arrests and detentions started, I said to myself, ‘Enough already. This is my struggle, too. Those women are fighting for my right, too, as a Jewish woman to pray at the Kotel. And that’s when I joined.”

It was back in October, when Hoffman was detained by police and locked up overnight that Ayelet Wieder-Cohen, the chairwoman of Kolech, decided it was time to get off the fence. “That was the event that shocked me into action,” she says, “and I understood that after years of staying away, I had to come back to the Kotel.”

In October, Wieder-Cohen wrote a public letter to Prime Minister Benjamin Netanyahu, expressing outrage at Hoffman’s arrest, and earlier this month, as a personal expression of solidarity with their cause, she joined Women of the Wall at their monthly prayer service with a contingent of about 10 other women from Kolech.

All they want is to pray

Tova Hartman, a professor of gender studies and the founder of the Shira Hadasha congregation, says praying with Women of the Wall on Rosh Chodesh is not her thing, “but it doesn’t mean I don’t completely support them and what they’re doing.

“These are women who came to pray at the wall, that’s all they wanted,” notes Hartman. “They didn’t come to antagonize. They only started becoming louder when there was an attempt to silence them. The same thing happened when women asked for the right to vote.”

Dr. Chana Friedman,one of several Orthodox women in Israel to be recently ordained as the equivalents of rabbis in matters of Halakhic rulings, is far from a convert to the cause, disturbed by what she sees as Women of the Wall’s attempt to turn prayer into a political statement. Still, Friedman says, she’s come around a bit in recent weeks, ever since Sharansky announced his plan for changing the old rules.

“I take off my hat to them,” says Friedman. “It turns out that sometimes, in order to make your voice heard, you need to go to the extreme, and until they became more and more militant, nobody was paying attention to what was happening at the wall.”

If Women of the Wall were not on the radar of most Orthodox Israeli feminists until quite recently, explains Friedman, that’s because she and others like her were busy fighting other battles.

While she’s impressed with the organization for forcing a compromise on the government, it’s a compromise that’s not entirely to her liking. “I’m not sure that the answer is to provide every group with a separate space,” says Friedman. “In my ideal world, it would be one big common space for everyone, which would require each group to give up a little in order to fit in.” That, she says, is the true meaning of pluralism.
Posted by joe levin at 5:56 AM