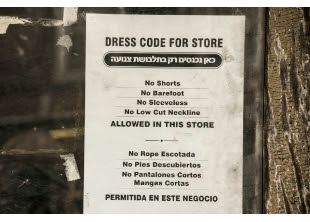 Is City Hall about to take action against the dress codes at Manhattan’s top-flight restaurants?

Of course not. And that only underscores the hypocrisy that all too often animates this administration. Because the city is going after Hasidic-owned store-owners who ask their patrons to dress modestly.

The city’s Commission on Human Rights has cited seven small stores in the Hasidic section of Williamsburg for discrimination.

Their offense? Posting signs that read: “No Shorts, No Barefoot, No Sleeveless, No Low Cut Necklines Allowed in the Store.” Which is no different than restaurants requiring men to wear a jacket and tie — or a pizzeria posting a sign reading “No shirt, no shoes, no service.”


The city disagrees, and is suing the shops. Cliff Mulqueen, the commission’s general counsel, explained to The Jewish Week that while “dress codes are OK . . . telling someone they have to abide by certain rules of the Jewish faith crosses the line into [establishing] a protected class.”
But again, that’s not what the signs say. And the city hasn’t found a single person refused service because of his attire.

Here’s the operative distinction: Anyone turned away from these stores for his or her dress can change clothes and be admitted. Anyone denied service because of his or her race, religion or gender can’t do that.

The commission took action after The Post first reported the signs last July. At the time, a top official of the city Law Department said the signs appeared to be OK.

The good news is that the case has now attracted the attention and support of a top law firm, Kirkland & Ellis, which is representing the shop-owners pro bono. Notably, the firm is citing important First Amendment religious-liberty issues.

The city would do us all a favor if it limited its authorities to fighting genuine discrimination under the law — not inventing it where it doesn’t exist.
Posted by joe levin at 3:08 PM