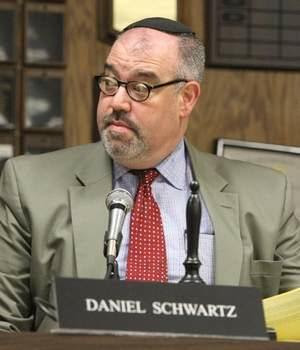 The East Ramapo Board of Education president has announced his resignation, a district official said.


Daniel Schwartz, who was serving his first term on the embattled school board, submitted a letter of resignation Friday, district clerk Cathy Russell said.

“I did receive a letter of resignation,” she said. “It’s not effective until Monday.”

Russell said Schwartz gave no explicit reason for the decision to quit the board other than to say it was “personal.”
Schwartz wrote that it was an “honor” to serve on the board and he wished the board, administration and district “nothing but the best into the future.”

“Moreover it has been a privilege to work with a group of honorable people, dedicated to the public benefit. I will long cherish the many friendships I have made during my tenure,” he wrote.

Schwartz, who practices family and matrimonial law at the Kantrowitz, Goldhamer & Graifman law firm in Chestnut Ridge, was elected president in July 2012 and has been leading the nine-member school board as tensions between it and the public have become increasingly contentious.

He and several other board members and district administrators are defendants in a federal lawsuit filed by hundreds of parents who claim the officials have wrongfully steered public tax dollars to private schools to benefit the Orthodox community’s yeshiva education system. Legal petitions calling for the removal of board members have also been filed by members of East Ramapo’s ardent activist community.
The federal lawsuit was filed on behalf of about 400 plaintiffs by the public interest law firm Advocates for Justice. A court hearing is set for 3 p.m. Monday at the federal courthouse in White Plains.

Schwart’s resignation comes at a crucial point for the financially strapped school district, which has been working to craft its budget for next year with oversight from the state Education Department. Officials have proposed a $211.9 million spending plan that includes a 3.16 percent tax levy increase; the board plans to adopt the budget next week.


Though the district plans to eliminate up to 52 positions next year, it still has a $6 million-plus shortfall to fill, according to information posted on the district website.

Schwartz and Superintendent of Schools Joel Klein could not immediately be reached for comment.

Schwartz is the third member of the board to quit in 2013. Stephen Price and Suzanne Young-Mercer, members of the board’s minority faction who often voted opposite the Hasidic and Orthodox majority, quit unexpectedly in January, saying they’d been subject to a pattern of intimidation by their colleagues and offered little information from the administration on key financial matters.

Yehuda Weissmandl, the board’s vice president who was elected with Schwartz in 2011, declined to discuss reasons for his colleague’s departure.

“Daniel is very passionate about the school district,” Weissmandl said. “He fought hard for the kids in the district and his presence on the board will be missed.”

The board has called a special meeting Monday night to talk about filling the position.

Asked whether the board might fill the seat before the May 21 school board election, when three other seats will be up, Weissmandl said he would wait to confer with the district’s lawyers.

“Honestly, I’m in uncharted territory,” he said. “We’ll get together as a board with counsel and we’ll talk about it.”


Petitions for school board candidacy are due to the district clerk’s office by 5 p.m. Monday. As of Friday afternoon, Russell said she’d received none, though several individuals have informally announced their intentions to run.
By filed under - Lohud
Posted by joe levin at 6:39 PM