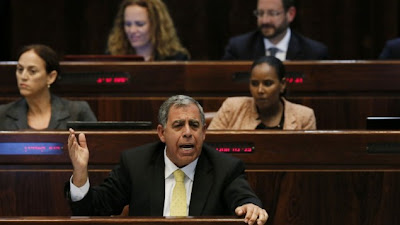 
In an interview with Kol Berama, an ultra-Orthodox radio station, Levy, a former Jerusalem District police chief, said that the community must join the labor force because “it’s impossible to be parasites on the Israeli public. The ultra-Orthodox must bear the burden… and enter the job market. It is impossible to continue to be carried on the shoulders of the Israeli taxpayer.”

Levy immediately apologized and retracted his remark, and said that “you are equal citizens, [and must] be obligated with responsibilities” instead of “continuing to live off those… who serve their country.”

MK Eli Yishai of Shas immediately denounced Levy’s remarks, likening them to statements made in 1942 Germany. “If similar statements, such as the deputy minister said, were spoken about the Jewish community by a parliament member in another country, that country would be shocked, and rightly so.”

Yishai said that such conduct “legitimized and encourages further harm to the ultra-Orthodox public… elsewhere in the world this behavior and conduct is called anti-Semitism.”

Shas MK David Azoulay said Levy’s comment grew out of the “hateful environment” in which he operates. “In his party, inciting against the ultra-Orthodox public is considered a good way of producing headlines and gaining exposure,” said Azoulay.

Levy later repeated his apology in the Knesset.
Posted by joe levin at 9:32 AM