The Boston bombers have already scored a tremendous victory for terror 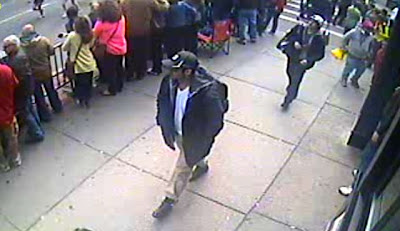 This was terrorism’s great victory, its spectacular triumph, its abhorrently glorious day in the sun. Never, in the history of violence aimed at innocent civilians, have the lives of so many been disrupted so much by the relatively amateurish actions of so few.


More than a million people cowered in their homes on Friday, under curfew, gripped by fear. The U.S. army and other security forces invaded and occupied an American town. Helicopters, armored vehicles, soldiers in full battle gear and crack SWAT teams sealed off streets and conducted house-to-house searches.

And the entire world was glued to its radios, television sets, computers, tablets and mobile phones, riveted by the almost incomprehensible scenes hitherto confined to outlandishly scripted Hollywood movies.

For five straight days, even before Friday’s surrealistic firefights and manhunts in Cambridge and Watertown, the Boston bombings had captured American hearts and minds and taken them hostage. The news networks went into breathless breaking news mode, erasing any and all hitherto cardinal issues from their agenda. Syria, Iran, North Korea, immigration and gun control – including the “routine” murder of about 150 other Americans in the hiatus – all were put on hold or relegated to the back burner.

Of course, the killing of three precious people and the injury of dozens of others are a painful tragedy and an unforgiveable crime. Of course, the disruption of an iconic marathon in the heart of one of America’s proudest cities is a significant event that warrants the full attention of the media and the justice authorities. Of course, Americans are justifiably concerned that after the first street bombing, others may follow.

But this was not 9/11, the Bombay bombings or the Beslan slaughter of children, also carried out by Chechen terrorists. It wasn’t the Bali nightclub bombings, the downing of Pan Am 103 over Lockerbie or the destruction of the federal building in Oklahoma. And it didn’t come close even to the Tel Aviv Dolphinarium carnage, the killing of students in Maalot or the murder of 39 Palestinians in the Cave of the Patriarchs in Hebron.

Therefore, in terms of cost-benefit analysis, from the evil terrorist’s point of view, the Boylston Street bombings and their after aftermath can only be viewed as a resounding triumph. If the primary goal of terror attacks is to instill fear and intimidate people, to influence governments and to attract world attention, then the Boston bombers have probably succeeded beyond their wildest dreams.


Explanations and justifications are plentiful and probably pertinent. There is no doubt, for example, that the Internet-era, social media, instant multiplication and proliferation of every minute piece of data increasingly obliterate competing narratives. And the mesmerizing pictures of the moments of drama captured on all-pervasive cellphones and security cameras make it harder and harder for audiences at home to tear their eyes away from the unfolding epics playing out on their screens. And these, in turn, magnify the impact of terrorist events on the public and influence the decisions of their government.

Americans might have also been shocked by the sudden realization that the 12-year lull in terrorist attacks following 9/11 has come to an end. Just like a “trigger trauma” for people suffering from Post Traumatic Stress Disorder, the Boston terror incidents have taken many Americans back, psychologically and emotionally, to those terrifying days of fear and uncertainty following the Twin Towers attacks.


Politicians and pundits in America and around the world will now debate whether the events of the passing week were a manifestation of American resoluteness and strength of purpose or worrying signs of alarm, anxiety and panic. There are good claims to be made on both sides of the argument.

But just like the shots fired at Lexington Square exactly 238 years ago, the bombs detonated this week at Copley Square 13 miles away have also been heard around the world. The question is, however, whether the sounds from Boston will once again touch the hearts of lovers of freedom and liberty, or whether this time it will be malevolent terrorists and those who wish ill for America who will be encouraged and inspired.
Posted by joe levin at 5:49 PM