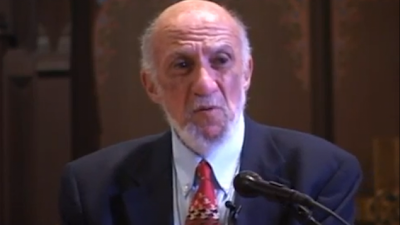 The Boston Marathon bombings last week should have been expected given US policies around the world, a senior UN official, who is charged with reporting on violations to Palestinian human rights, said Sunday.


UN official Richard Falk said the Boston Marathon explosions — which killed three people and injured over 170 — were expected given Washington’s ongoing policy around the world, specifically in the Middle East, Iraq and Afghanistan.

“The American global domination project is bound to generate all kinds of resistance… the United States has been fortunate not to experience worse blowbacks,” Richard Falk wrote in the Foreign Policy Journal.

Falk, named by the United Nations Human Rights Council a United Nations Special Rapporteur in 2008 and tasked with monitoring the situation “in the Palestinian territories,” has a history of provocative and outrages statements, both supporting Islamic terror and bashing Israel.

The 83-year-old statesman said he was not alone in thinking American actions around the world and in the Middle East specifically were connected to the bombings, which deeply scarred the country and Boston. He cited a PBS call-in program in the hours after the bombing in which people said the US was responsible for “officially sanctioned torture,” and suggested the attack was “retribution for torture inflicted by American security forces.”

“It is horrible, but we in this country should not be too surprised, given our drone attacks that have killed women and children attending weddings and funerals in Afghanistan and Pakistan,” Falk quoted one of the people as saying following the attack.

American politicians don’t “have the courage to connect some of these dots,” Falk said. “Should we not all be meditating on W.H. Auden’s haunting line: ‘Those to whom evil is done/do evil in return.’”

The official and former professor criticized America’s policy regarding Iran’s nuclear program and friendship with Israel. The US was likely to experience more acts of terror, Falk wrote, “especially if there is no disposition to rethink US relations to others in the world, starting with the Middle East.”

“The war drums are beating at this moment in relation to both North Korea and Iran, and as long as Tel Aviv has the compliant ear of the American political establishment, those who wish for peace and justice in the world should not rest easy,” he stated.

Falk, who is Jewish, has come under criticism several times before for what are seen as extreme views, especially regarding Israel and the United States.

“He was picked for a reason, and the reason is not to have an objective assessment — the objective is to find more ammunition to go after Israel,” former US ambassador to the UN John Bolton said after Falk’s appointment.
Posted by joe levin at 8:38 AM