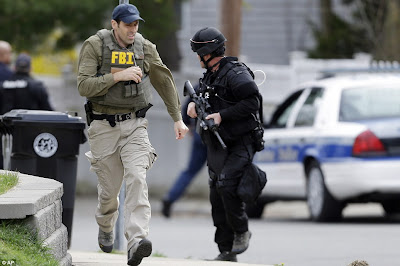 The Russian FSB intelligence security service told the FBI in early 2011 about information that Tamerlan Tsarnaev, one of the brothers suspected in the Boston Marathon bombings, was a follower of radical Islam, two law enforcement officials said Saturday.


Tamerlan Tsarnaev died in a shootout Friday, and his younger brother was captured alive. They were identified by authorities and relatives as ethnic Chechens from southern Russia who had been in the US for about a decade.

According to an FBI news release issued Friday night, a foreign government said that based on its information, Tsarnaev was a strong believer and that he had changed drastically since 2010 as he prepared to leave the US for travel to the Russian region to join unspecified underground groups.

It said that Tamerlan, 26, and Dzhokar, 19, were residents of Massachusetts who were both born in Kyrgyzstan. “Tamerlan Tsarnaev was a legal permanent resident and Dzhokar Tsarnaev is a naturalized US citizen.”

The FBI did not name the foreign government, but the two law enforcement officials said it was Russia and identified the FSB as the provider of the information to one of the FBI’s field offices and also to FBI headquarters in Washington. The two officials spoke on condition of anonymity because they were not authorized to speak on the record about the matter.

The FBI said that in response, it interviewed Tsarnaev and relatives, and did not find any domestic or foreign terrorism activity. The FBI said it provided the results in the summer of 2011. The FBI also said that it requested but did not receive more specific or additional information from the foreign government.

The bureau added that in response to the request, it checked US government databases and other information to look for such things as derogatory telephone communications, possible use of online sites associated with the promotion of radical activity, associations with other persons of interest, travel history and plans and education history.