Judge to weigh rabbi's bid to defend self in slay case 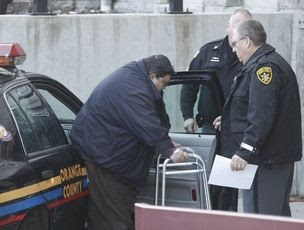 GOSHEN — A judge will consider a first-degree murder suspect's request to represent himself in Orange County Court.

Brooklyn Victor Koltun, 43, faces murder and conspiracy charges in the Nov. 4, 2010, slayings of Gerald Piscopo, 28, of Highland, and his uncle, former Lloyd cop Frank Piscopo, 49, in the City of Newburgh. Koltun's two co-defendants were sentenced in late 2011 to prison terms for conspiracy.

Prosecutors say Koltun was the mastermind of a murder-for-hire plot against Frank Piscopo.

Rabbi Koltun is now represented by Paul Brite, his second lawyer in the case.

He has filed complaints against Brite, and a number of agencies, claiming various violations of his rights and wrongful detention.

On Tuesday, Judge Jeffrey Berry said he'll consider Koltun's standing request to represent himself; before he'll allow it, Berry will essentially question Koltun to ensure that he understands the proceedings and the ramifications. Berry set May 10 as the date for that inquiry.
Posted by joe levin at 6:24 PM