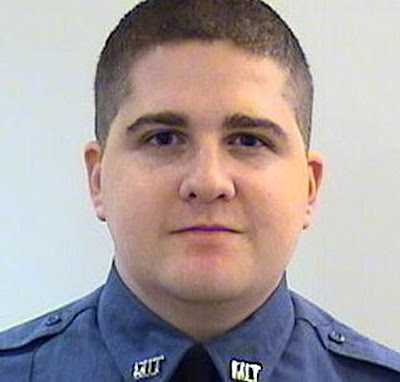 A much-loved MIT campus police officer with less than two years on the force is the Boston Bombers’ fourth victim, authorities said.


Sean Collier, 26, of Somerville Mass., was shot multiple times in his squad car by the bloodthirsty brothers Dzhokhar and Tamerlan Tsarnaev around 10:20 p.m. after the pair attempted to rob a 7-Eleven, according to police and news reports.

MIT Police Chief John DiFava said Collier was a dedicated officer who was “extremely well liked by his colleagues and the MIT community.”

After killing the cop, the Chechen madmen carjacked a Mercedes SUV near Third St. in Cambridge, Mass.

They held the driver of the ride at gunpoint for about a half-hour and released him uninjured at a gas station on Memorial Dr., police said.

Cops then chased the vehicle roughly five miles into Watertown, Mass., as the mad bombers dropped explosives from their ride, police said.

A fierce gun battle ensued between cops and the suspects in the area of Dexter and Laurel Sts., police said. During the exchange, Massachusetts Bay Transportation Authority officer, Richard Donohue Jr., 33 was shot and taken to Mount Auburn Hospital. He is in critical condition, according to multiple reports.

During the fierce melee, Tamerlan was killed by police.