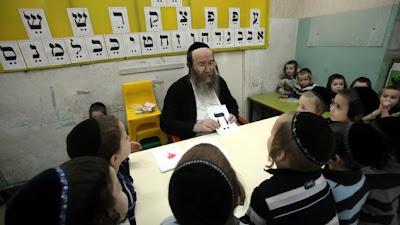 A draft of the Finance Ministry’s Economic Arrangements Law, revealed Wednesday, threatens far-reaching consequences for the ultra-Orthodox public, proposing to cut state funding to schools that do not teach core curriculum subjects.


The proposal, to be presented Thursday to Attorney General Yehuda Weinstein for legal review, would slash funding by half to ultra-Orthodox religious schools that do not teach core subjects such as mathematics and English, while increasing funding to those that do embrace the core Israeli curriculum.

In addition, the Finance Ministry would require that all schools that receive state funding participate in international standards testing and that all students take matriculation exams — requirements many ultra-Orthodox institutions do not meet. The proposal would also revamp and improve government oversight of state-funded religious schools.

Another education issue in the proposed law likely to impact the ultra-Orthodox community is a plan to make a child’s attendance in a state-funded kindergarten, currently available from the age of three, contingent on documenting that both parents are employed, a difficulty for the many ultra-Orthodox families where men study in yeshiva full-time.

If the ultra-Orthodox do not enter the workforce, the burden of paying taxes and doing military service will fall on only 35 percent of Israel’s population, Deputy Finance Minister Mickey Levy said on Wednesday. “Unless they are given core studies, a little mathematics and some computer science, they will never be integrated into the labor market,” he said.

The Economic Arrangements Law is a government bill presented to the Knesset alongside the state budget. It incorporates a wide variety of government-backed bills and legislative amendments that promote the government’s economic policies.

In addition to the cuts in state schools, Israel’s yeshivas, which are classified as institutions of higher learning, are set to see a 30 percent cut to their funding, saving the state NIS 340 million a year (some $93 million), sources in the new ministerial committee tasked with drafting mandatory service legislation said on Monday.

“This attack on the ultra-Orthodox public won’t bring salvation and won’t close the hole in the deficit,” MK Ya’akov Asher (United Torah Judaism) said on Wednesday.


Asher, a former mayor of Bnei Brak, said that Torah study is a way of life for the devout, and “the planned cuts are less than a thousandth of the hole in the budget… [and] Yesh Atid is well aware that some ultra-Orthodox children, especially girls, are learning professions.”

The tensions between the new government’s deficit-reducing budget proposals and the ultra-Orthodox community came to a head Monday during an extended, heated exchange in the Knesset between Finance Minister Yair Lapid (Yesh Atid) and Knesset members from United Torah Judaism, who are now in the opposition.

The incident, widely reported in the Israeli press and heavily commented on in social media, saw Lapid berate the ultra-Orthodox MKs, who were interrupting him when he had the floor to explain the new budget. Lapid noted that the last government, in which UTJ controlled the Knesset finance committee, created the budget deficit in the first place.


On Tuesday, Education Minister Shai Peron (Yesh Atid), who has advocated for sweeping changes in Israel’s educational system, said that as things currently stand, Israeli schools are “not relevant for the 21st century.”

Children in school read less and think less, while some teachers are knowingly teaching information that isn’t always relevant, Piron said. Among other proposed changes, the Ministry of Education has announced a plan to greatly reduce the numerous matriculation exams required for high school graduation.
Posted by joe levin at 8:52 AM