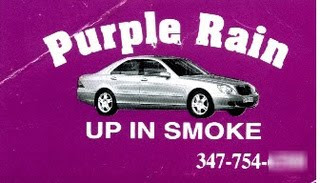 Cops say the pair supplied cocaine and marijuana to over 200 customers throughout Manhattan. The pair advertised their 24-hour drug delivery services with two business cards, which were widely distributed in the East Village, the Lower East Side and Tribeca.

One card bore the "Coca Cola" logo and a phone number, while the other card depicted a livery car and words "Purple Rain…Up in Smoke" with a second phone number.

Prosecutors say Thoomas Zenon and Miguel A. Guzman would paper-clip the cards inside newspapers in distribution boxes. One of the boxes was located outside a NYU dorm at 10th Street and 3rd Avenue. The cards were also stuck inside of the door jams in apartments in a Tribeca high-rise.

Prosecutors say the pair divvied up their delivery duties depending on the day of the week. On the busiest nights, each of the two phones listed on the cards registered approximately 170 in-coming and out-going calls.

Police call the cocain they sold unusually low-priced for its high-quality.

Police arrested Guzman as he prepared to make a delivery to a customer on the Upper West Side. He was carrying 16 grams of cocaine, more than $1,600 in cash and four phones. Officers also found Coca Cola business cards inside his car.

Zenon was arrested inside a restaurant in Washington Heights. Police found 20 bags of marijuana inside a coffee thermos, Purrple Rain business cards, a Dasani water bottle with a removable bottom, a GPS device and two phones.
Posted by joe levin at 3:17 PM