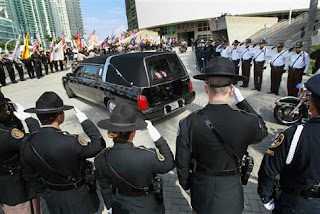 A spate of shooting attacks on law enforcement officers has authorities concerned about a war on cops.

In just 24 hours, at least 11 officers were shot. The shootings included Sunday attacks at traffic stops in Indiana and Oregon, a Detroit police station shooting that wounded four officers, and a shootout at a Port Orchard, Wash., Wal-Mart that injured two deputies. On Monday morning, two officers were shot dead and a U.S. Marshal was wounded by a gunman in St. Petersburg, Fla.

On Thursday, two Miami-Dade, Fla., detectives were killed by a murder suspect they were trying to arrest.

"It's not a fluke," said Richard Roberts, spokesman for the International Union of Police Associations. "There's a perception among officers in the field that there’s a war on cops going on."

With the Florida deaths, the nation is on track in 2011 to match the 162 police officers killed in the line of duty in 2010, said Steve Groeninger, spokesman for the National Law Enforcement Officers Memorial Fund, the Washington, D.C.-based nonprofit that tracks police casualties. In January this year there have been 14 deaths, the same number as in January 2010, the fund posted on its web site.

Law enforcement advocates worry that cuts in police budgets could exacerbate the danger.

"We don't have any data, but there seems to be a type of criminal out there looking to thwart authority," he said.

He cited the example of Jared Loughner, accused of killing six and wounding 13, including Rep. Gabrielle Giffords, on Jan. 8 in Tucson, Ariz. "People with this mentality feel the need to eliminate those in position of authority," he said.

Roberts said the recent shootings are reminders that officers must constantly stay on alert.

"The bad guys are not afraid of cops," Roberts said. "They’re rarely rational. You get that combination, when you ID yourself as a cop, it does not scare them away; it makes it more dangerous for you."

Noting the Oregon and Indiana shootings occurred during so-called "routine traffic stops," Roberts said, "The word routine should be eliminated from the job. There's no such thing. There is only 'known risk' and 'unknown risk' " he said.

Reducing police response times and cutting back on in-service training can endanger not just citizens but cops on patrol, they said.

"It's not a good situation out there," Groeninger said.

Here is the status of the police shooting investigations on Monday:

•Indianapolis police say they arrested Thomas Hardy in the shooting of Officer David Moore, who was shot in the face and body and remained in a coma.

•A manhunt continued in the Oregon beach town of Waldport for a gunman who shot officer Steven Dodds, 45, a six-year veteran of the Lincoln City Police Department. Police were looking for the owner of a 1984 Dodge truck that fled the shooting scene.

•One of two deputies wounded in Port Orchard, Wash., was released from the hospital while another remained in satisfactory condition after being wounded Sunday in a gunfight. A suspect and a female victim who came running to his aid were killed. Police were investigating how the female victim was shot. The gunman was identified as Anthony A. Martinez, 31, of Salt Lake City. The Deseret News said police had issued an endangered persons advisory for a 13-year-old runaway believed to be traveling with Martinez.

•In St. Petersburg, Fla., a suspected gunman was found dead after two police officers were shot to death and a U.S. marshal was injured as they tried to make an arrest. Suncoast Benevolent Association President Mark Marland identified the fallen officers as Tom Baitinger and Jeffrey Yaslowitz.

•In Miami, thousands of law enforcement officers gathered at a funeral service in American Airlines Arena to honor Roger Castillo, 41, Amanda Haworth, 44, who were killed on Thursday while serving a warrant on a suspected killer. The suspect, 22-year-old Johnny Simms, was killed by another officer.
Posted by joe levin at 6:57 PM